Below 2C
Home Climate Climate Change Temperature Rise of 1.5°C Could Happen by 2024 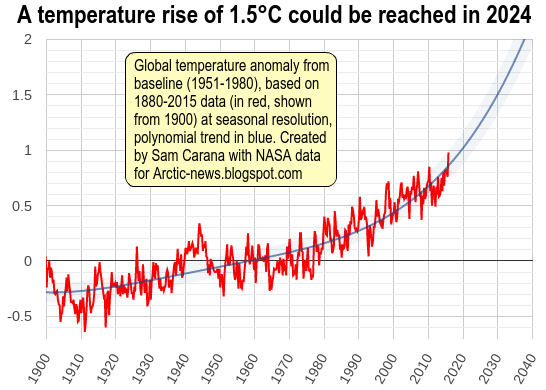 In this post, Sam Carana shows that the aspirational goal (agreed to in Paris) of limiting the global temperature rise to 1.5°C is quite simply, delusional. (Rolly Montpellier, Editor for BoomerWarrior).

How much have temperatures risen already? In the above illustration, NASA data show that during the three-month period from September through November 2015, it was ~1°C warmer than it was in 1951-1980 (i.e the baseline).

A polynomial trend based on the data from 1880 to 2015 for these three months indicates that a temperature rise of 1.5°C compared to the baseline will be reached in the year 2024.

Full Wrath of Emissions on the Horizon

The full wrath of global warming is yet to come and the situation is even more threatening than pictured above, for the following reasons:

Such a temperature rise will hit some people more than others. For people living on the Northern Hemisphere, the outlook is worse than for people in the Southern Hemisphere.

Similarly, the outlook is worse for people living in regions that are already now experiencing high temperatures during the summer peaks. With a temperature rise, the intensity of such peaks will increase.

The image below, from an earlier post, depicts the impact of feedbacks that are accelerating warming in the Arctic (NASA data up to November 2013) and their threat to cause runaway global warming. As the image shows, temperatures in the Arctic are rising faster than elsewhere in the world, but global warming threatens to catch up as feedbacks start to kick in more.

The situation obviously has deteriorated further since this image was created in November 2013.

This warm water is carried by the Gulf Stream into the Arctic Ocean, threatening to unleash huge amounts of methane from its seafloor.

Methane is released over the Arctic Ocean in large amounts, and this methane is moving toward the equator as it reaches high altitudes. Methane levels have risen by an estimated average of 9 ppb or some 0.5%. Annual emissions from hydrates were estimated to amount to 99 Tg annually in a 2014 post (image below).

An additional 0.5% of methane represents an amount of some 25 Tg of methane. This comes on top of the 99 Tg of methane estimated in 2014 to be released from hydrates annually.

The situation is dire and calls for comprehensive and effective action as described at the Climate Plan.