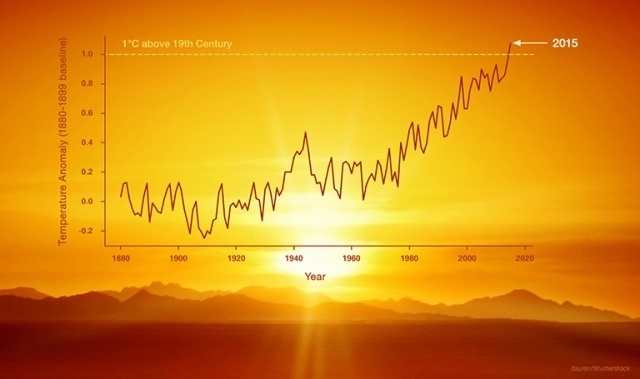 The planet is undergoing an unprecedented leap in warming. Just released NASA data shows that February 2016 was the first month ever that global average temperatures passed the 1.5C mark. The previous record was January 2016 at 1.14C hotter than average. That was broken by the December 2015 record of 1.10C. We are entering a new phase of accelerated heating up. We are now in global warming overdrive.

Eric Holthaus is a meteorologist who writes about weather and climate for Slate’s Future Tense. He claims that humanity has reached a “milestone moment”:

Never before have average temperatures across the Northern Hemisphere breached the 2C mark. It’s likely the first time since the beginning of human civilization. That mark is broadly interpreted as the threshold above which climate change will begin to become “dangerous” to humanity. And it’s now arrived—albeit very briefly—much more quickly than anticipated. “This is a very worrying result,” said Bob Ward, policy director at the Grantham Research Institute on Climate Change at the London School of Economics:

These results suggest that we may be even closer than we realised to breaching the [2C] limit. We have used up all of our room for manoeuvre. If we delay any longer strong cuts in greenhouse gas emissions, it looks like global mean surface temperature is likely to exceed the level beyond which the impacts of climate change are likely to be very dangerous.

Almost overnight, the world has moved within arm’s reach of the climate goals negotiated just last December in Paris. One of the major pieces of the Paris Agreement is a signed commitment to hold global warming to a 2C target by the end of the century, with an aspirational goal of 1.5C if possible. Since we’re already nearing 1.5C, the aspirational goal is more delusional then realistic.

The new deal will not solve global warming. Scientists say that it will reduce emissions by no more than half of what is required to stay below the threshold. We know that a future beyond 2C will see devastating consequences — extreme weather, severe drougths, rising sea levels, food and water shortages, declining public health and extensive flooding.

The UK Met Office estimates that 2016 will be warmer than 2015 which was warmer than 2014 making the three years the warmest ever recorded. Fourteen of the 15 hottest years on record have occurred since 2001. February 2016 was the 372nd consecutive month with global temperatures above the 20th century average.

Recent warming trends have led scientists to label the new February 2016 record a “shocker” and warn of a “climate emergency”. The August 2015 Rolling Stone article  — The Point of No Return: Climate Change Nightmares are Already Here — begins with “historians may look to 2015 as the year when shit really started hitting the [climate] fan.” And now just six months later the world is indeed experiencing the steepest warming yet.

For the fourth consecutive year, CO2 levels have risen by more than 2 parts per million, with 2015 showing the largest yearly increase of 3.05 ppm, according to a NOAA report.

We are now pumping  carbon dioxide into the atmosphere 10 times faster than at any point in the past 66 million years, according to new research published in Nature Geoscience.

The world has entered “uncharted territory” and the consequences for life on land and in the oceans may be more severe than at any time since the extinction of the dinosaurs.

The latest scientific studies about melting ice in the polar regions — the Arctic and Antarctica —  are quite disconcerting.

Antarctica – The Science Daily reports that ice melting rates were 25 times higher than expected in localized areas of Antarctica’s largest ice shelf. New reports are being published almost weekly it seems. Another such study shows how Eastern Antartica, which contains the ice equivalent of a 20-foot rise in global ocean levels, is melting due to warming ocean waters. “Every degree of heat increase melts an additional 30 feet of ice, each year,” says Robert Bindschadler, a former glaciologist at NASA’s Goddard Space Flight Center.

The Arctic – Record Arctic heat is driving new low records for sea ice. Since the beginning of the year, Arctic temperatures have been setting record warm temperatures. The entire region has seen the warmest recorded winter temperatures ever. Scientists observing the start of feedback loops in Greenland fear that the same will cause the Arctic melting to intensify making drastic seal level rises an inevitability. Melting feeds on itself producing loss of sea ice, generating even more melting, leading to more loss of sea ice, a process known as  “Arctic amplification.”

“The alarming rate of change we are now witnessing in our climate as a result of greenhouse gas emissions is unprecedented in modern records,” says Petteri Taalas, Secretary General of the World Meteorological Organization. The dangerous climate future has arrived.

A state of alarmism and panic over this unheard-of warming is evident in media headlines. “What we’re doing to the Earth has no parallel in 66 million years scientists say,” writes Chris Mooney in the Washington Post.