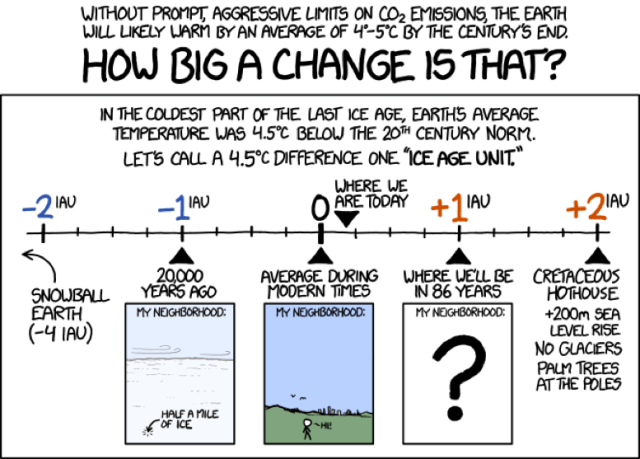 The following climate change cartoons are quite convincing. They can be a valuable aid in discussing the serious matter of the climate crisis we face with your friends or perhaps your elderly parents and of course your kids and grandchildren.

Showing a visualization can be very useful in understanding a subject – or even persuading someone of your point of view. And you don’t even have to quote scientific journals or lay out a ton of statistical data to prove your point.

So here are the best cartoons to explain climate change – and how we can solve it. Sometimes you just have to ask, “do I need to draw you a picture”?

1. So What Is Climate Change?

If you’ve heard Bill Nye explain the basics of climate change, you know that greenhouse gases, mainly released by the burning of fossil fuels, are causing the average temperature of our planet to increase. By the end of the century, it could be 4–5˚C warmer. So what’s the big deal? XKCD shows how just a few degrees can cause a huge shift.

2. The Signs Are Everywhere.

Let’s face it – the signs are everywhere. If these species could protest, they would – and Bird and Moon shows how it would look when a climate change denier is confronted with the wisdom of mother nature.

3. Climate Change is Rough for People and Other Residents on the Planet.

As the seasons shift and unexpectedly extreme events become the norm, wildlife has to adapt – or die. Bird and Moon visualizes the climate change shuffle that species are trying to learn to stay alive.

4. Despite All the Evidence, Some People Still Don’t Get It.

We’re seeing the signs more and more. Strange seasons, extreme weather, hotter heat waves, and species changing their behaviors just to survive. And yet every winter without fail, there’s that one guy who says “So much for global warming!” as soon as the thermometer drops below 32 degrees. XKCD puts the gradual shift into a human perspective.

Together, we’ve solved a lot of tremendous problems the world has faced, and made wondrous advances in the span of decades, or even years that naysayers swore could never happen. Just look at computers: They used to take up an entire room. Now they fit in the palm of your hand.

We can make changes to our energy. In fact, the shift to power our lives – and the economy – with clean, renewable energy is already underway. As Bob Dylan said, the answer is blowin’ in the wind. We can transition from dirty, dated fossil fuel energy to clean sources like wind and solar power. And when it comes to that plan, we’ve got to say it: We’re big fans!