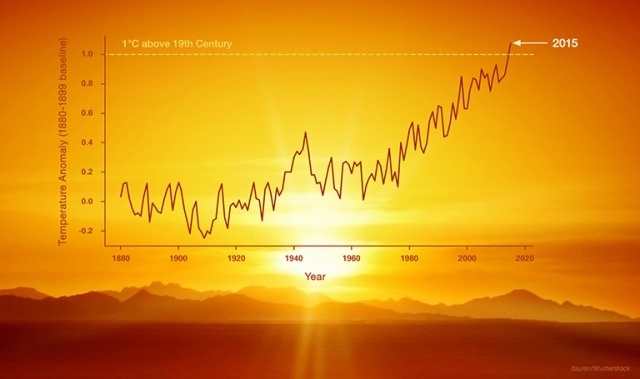 “It’s happening that fast,” says Mark Eakin who is with NOAA’s Satellite Oceanography and Climatology Division. Global warming turmoil is our new climate reality. The monthly temperature has been above average since 1985. And we are now entering an era of climate consequences. And it’s alarming!

Monthly heat records are now commonplace. NASA has reported record-shattering warming in 2015. And NOAA has confirmed that May was the 13th consecutive warmest month on record. A string of 13 of them is without precedent.

Most of the warming occurred in the past 35 years, with 15 of the 16 warmest years on record occurring since 2001. Last year was the first time the global average temperatures were 1 degree Celsius or more above the 1880-1899 average. (NASA)

We Must Declare a Global Climate Emergency – Paul Beckwith

In the following videos Paul Beckwith discusses two of many abrupt climate change and climate weirding events the planet is experiencing. These are the result of Earth’s relentless warming, illustrating once again that it’s happening that fast.

Paul Beckwith: I discuss the state of Arctic sea ice. Will we have a blue-ocean event this summer, or in the next few years? What are the global implications if this happens? How will the climate system rearrange, and what will happen next? I ponder these extremely important questions, that will affect all people on our planet. Most people are oblivious to what is coming quickly, and will soon reach a state of panic.

Paul Beckwith: The jet stream in the Northern Hemisphere has crossed the equator and joined up with the jet stream in the Southern Hemisphere. This seems like new behaviour, and indicates that climate system mayhem is ongoing. Our climate system behaviour continues to surprise us in new and scary ways that we have never anticipated, or even seen before. Welcome to climate chaos.

NASA, NOAA, and the Japan Meteorological Agency all agree that the climate extremes of 2016 are unparalleled in modern climate record-keeping. And there’s every indication that 2016 will surpass 2015 as the warmest year ever recorded.

“If you are 30 years old or younger, there has not been a single month in your entire life that was colder than average,” writes Chris D’Angelo, Associate Editor, HuffPost Hawaii.