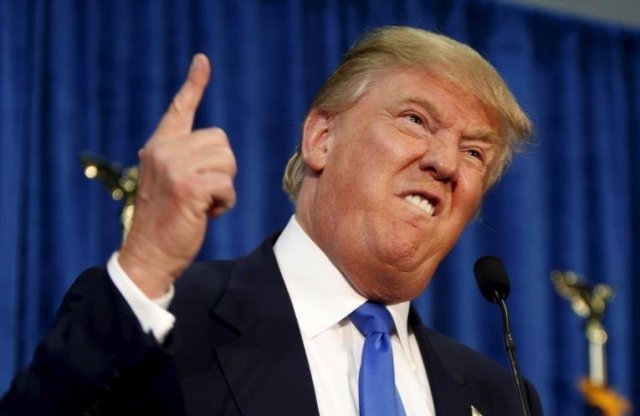 I’m pleased to welcome Dr. Cara Augustenborg as a contributor to BoomerWarrior. Cara believes that electing Donald Trump spells the end of the planet as we know it. I like to think of him as a global climate wrecking ball. You can find out more about her in the short bio at the end of the article. (Rolly Montpellier ~ Editor for BoomerWarrior).

U.S. Republican presidential candidate Donald Trump [recently visited] Scotland. He was scheduled to visit Ireland, but cancelled that leg of the journey after our Prime Minister called him “racist and dangerous” and rumors circulated that Trump would be confronted with a crowd of Irish protesters who did not welcome him in our “land of a thousand welcomes”.

Trump owns a golf-course on the southwest coast of Ireland. It’s at risk of falling into the sea due to erosion exacerbated by the Atlantic storms that are occurring with more intensity as a result of climate change.

Ironically, Trump’s company in Ireland has applied to the local county council to build a sea wall (yes, another wall!) to protect his golf course. They cited ”rising sea levels and increased storm frequency and wave energy associated with global warming” as the reason the wall should be built. While in America, Trump calls climate change a “hoax” and a “con job”.

For the rest of the world, electing Donald Trump quite possibly means the end of planet Earth as we know it. This sounds like hyperbole, but when it comes to climate change I’m deadly serious. We have a limited window of time to tackle climate change once and for all. To keep our Earth’s temperature within safe limits for life as we know it, we now have to make dramatic and swift changes to how we generate energy and power our homes, transport, and food production systems. To solve climate change, we have to transform to an essentially fossil-fuel free society across the globe within the next three decades.

Will Trump Renegotiate the Paris Agreement?

In December 2015, 197 countries within the United Nations agreed to attempt such change as part of the Paris Climate Agreement, but if Donald Trump is elected president he could single-handedly undo that tremendous global effort. He already said as much when his energy adviser, Congressman Kevin Cramer (a self-professed climate denier) recommended he “just pull out” of the U.N. Climate Agreement and Trump agreed that “at minimum” he would “renegotiate the deal” – a deal that has already taken over 21 years to negotiate.

For the climate, the alarm bells are sounding now as Arctic temperatures reach unprecedented warming and we see flooding and storms around the world the likes of which we’ve never seen before. We no longer have time for further negotiation, let alone a U.S. president who doesn’t take the biggest global challenge of our time seriously.

It’s really cold outside, they are calling it a major freeze, weeks ahead of normal. Man, we could use a big fat dose of global warming!

Watching interviews of Trump, one can see some appeal in his speaking style. It’s somewhat refreshing to see a politician that isn’t trying to please everyone for the sake of a vote and trying to please corporations for the sake of campaign funding. Naturally, when we watch someone on television week-after-week we begin to trust them as they keep us company in our living rooms. Donald Trump has garnered the public’s trust over the years more than most politicians could dream of thanks to his TV exposure.

Eggers called Trump a modern day Andrew Dice Clay, an irreverent American comedian of the 1990s who was known for misogynistic jokes. The similarities are palpable. It seems America may vote for a president on the basis of entertainment value without acknowledging the key role of the U.S. president in matters of vital global importance.

Throughout history, U.S. Presidents have played an essential role in matters of global conflict, trans-boundary environmental problems like depletion of the ozone layer, and humanitarian crises.

Climate change is undoubtedly the most difficult problem of all. If left unchecked, it will affect every person on every corner of the globe and make much of the world uninhabitable by the end of the century, and yet to solve it requires changing everything we do, everywhere.

The United States, as a global “superpower” and one of the largest emitters of the gases that contribute to climate change, must lead the way in solving this crisis. Without U.S. leadership, the climate and the world’s future is at risk of eventual chaos. America, if you’re listening, please don’t choose a president for the sake of a few laughs at the rest of the world’s expense. The climate can’t be fixed in the hands of a comic.