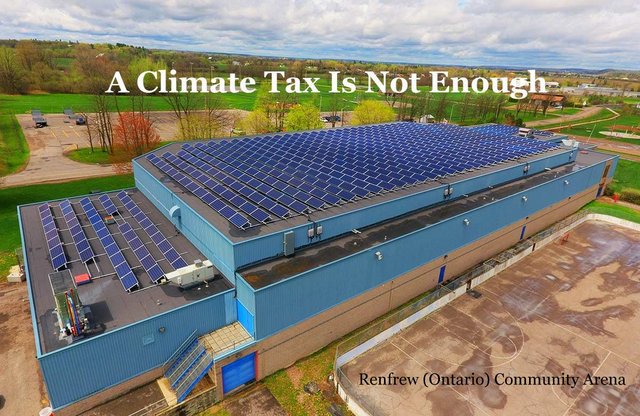 The call for a price on carbon as the key policy driver for reducing our carbon footprint is heard far and wide.  My co-editor at Below2°C and I actually met several years ago while lobbying the federal government for a carbon fee and dividend as proposed by Citizens Climate Lobby.  However, it’s time for sober second thought on the issue of pricing carbon. A Climate Tax is simply not enough.

While there was a fat chance of achieving a carbon tax or fee under the Harper regime, the Liberals actually did act on the carbon tax issue.  But it’s been a bit of a mixed blessing.

Although the Liberal carbon tax will price carbon and send an important signal, the Liberal plan doesn’t start until 2018, it starts at only $10/tonne of carbon dioxide, and only increases to $50/tonne by 2022.

Lets look at it’s potential impact on transportation, given it’s one of the big three for carbon reduction.  A $50 a tonne tax is equivalent to an additional 11.63 cents per litre of gasoline.  How strong a signal that sends motorists to drive less or buy more efficient vehicles is up for debate — it will take 5 years to ramp up to the 11.63 cents and  it’s about the amount the oil industry shamelessly increases gas prices right now before many a Canadian summer weekend.

In 1995, the Liberal government implemented an excise tax of 10 cents per litre on gasoline and collects about $5 billion per year in excise taxes on gasoline, diesel, and aviation fuel.  The Liberals could have increased the excise tax on gasoline by an additional 10 cents per litre in 2016 (shortly after gas prices at the pump had been much higher, so minimal sticker shock) and had equivalent impact as the 2022 carbon price, with the additional funds available to jump start transition to a low-carbon future years earlier.

The implementation of the carbon tax has also been used as a sort of implied Liberal rationale or license for then approving new fossil fuel infrastructure – Line 9 and the Kinder Morgan pipelines and the Lulu Island LNG plant.  This is happening at a time when we already have enough fossil fuel infrastructure in place to take us past 2 degrees Celsius of warming.  As Oil Change International points out, when you’re in a hole, stop digging.

A Climate Tax Is Not Enough

In June, 2016 Ontario’s 5-Year Climate Change Action Plan was announced.  The Globe and Mail responded with an editorial entitled Ontario is fighting climate change the wrong way.  The editorial questioned why the Ontario government didn’t just stop at a carbon tax rather than “dream up what threatens to become a megaproject of micromanagement.”

Brendan Haley, a PhD candidate at Carleton University’s School of Public Policy and Administration and a member of the Broadbent Institute (a Canadian think tank) wrote a concise and insightful response to the Globe and Mail editorial.

Roberts made the following five points:

Carbon pricing is politically constrained. “Climate policy does not take place in an economics graduate seminar; it takes place in a real world of powerful incumbents and conflicting interests,” says Roberts.

Smart policy aims not just to reduce carbon but to build constituencies for future policy. “Carbon pricing is particularly bad at creating supportive political coalitions because the benefits are widely diffused across the population, while the powerful groups that bear costs mobilize against the policy,” says Haley.

For example, Ontario’s displacement of coal with natural gas for electricity generation was low hanging fruit with important positive health and carbon impacts. But to meet our long-term carbon reduction goals, we also have to get off natural gas.

Hayley suggests that “Pricing strategies are also insufficient because even cost competitive low-carbon technologies are prevented from making their full contribution because of structural barriers such as regulatory rules, legacy infrastructures, and undeveloped complementary technologies (e.g. renewables require grids that are flexible, with rules that facilitate interconnection).” (David Roberts)

Roberts argues that  “The transition to a low-carbon economy is going to have profound implications for our cultures, economies, institutions, tools, and day-to-day lives. What sort of society do we want? What kinds of technological and governance systems do we want? How do we want to live? These questions involve core concerns (equity, fairness, happiness) that are often absent from, or simply orthogonal to, market transactions.”

Let’s Dispel the Myth of the Market Alone

I leave you with Brendan Haley’s conclusion: “The sooner we dispel ourselves from the myth that the market alone will solve the climate change problem, the sooner we can start to ensure more technology and sector specific policy approaches are implemented effectively and democratically.”

The sooner we dispel ourselves from the myth that the market alone will solve the climate change problem, the sooner we can start to ensure more technology and sector specific policy approaches are implemented effectively and democratically.