While it’s very easy to get caught up in the dynamics of the Kinder Morgan controversy, what about the real question, the truly critical question? What is the impact of the Tar Sands on global carbon emissions? Where Does Tar Sands Carbon Pollution Go?

Barry Saxifrage, a climate analyst/reporter, says that more than 3 billion barrels of carbon pollution from the Tar Sands have already been absorbed by the world’s oceans. “All the bitumen that doesn’t spill from pipelines or tankers gets burned, ending up as carbon pollution dumped into our environment,” he explains. “Over one-quarter ends up in the oceans, acidifying them for millennia to come.”

Since 1967, over 12 billion barrels of bitumen have been extracted from the Tar Sands, adding up to 6.3 gigatonnes of CO2 according to estimates from Oil Change International. The IPCC (International Panel on Climate Change) estimates that 28 percent of this carbon dioxide is absorbed by the oceans and 44 percent (~2.7 GtCO2) ends up in the air that we breathe. 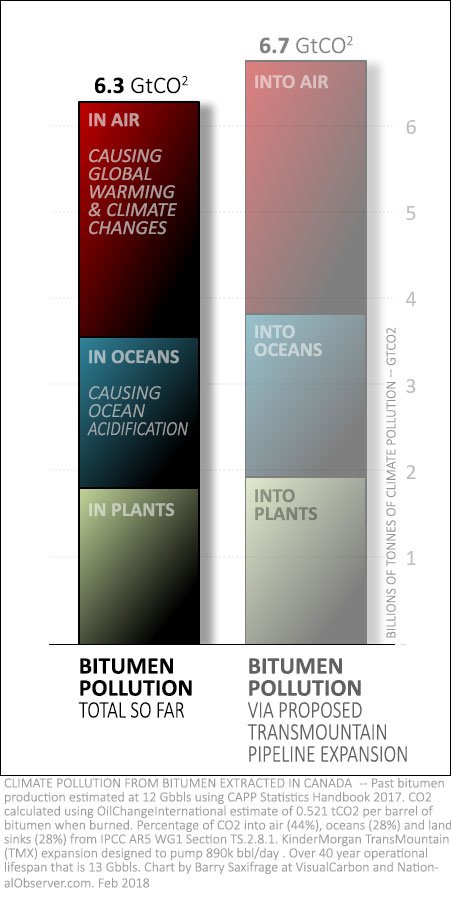 Saxifrage explains that the Kinder Morgan proposal will produce as much new bitumen as that already dug out since Tar Sands production began in 1967. If built, the pipeline will increase the flow of bitumen from 300,000 barrels per day to 890,000 barrels. And surely, more than doubling the amount of bitumen produced will also double the pollution dumped into our atmosphere.

“Whether this fossil carbon gets spilled in liquid, solid or gaseous form, it will cause lasting damage to marine life, to coral reefs, to fisheries and to the people who cherish and depend on our oceans,” says Saxifrage. “There is no scenario in which bitumen doesn’t “spill” into our oceans causing harm.”

2017 was the warmest year on record for the planet’s oceans. A little known fact is that our oceans have absorbed 93 percent of the human-caused warming since 1970, as recently reported in Scientific American. This warming is causing rising sea levels, a rapid decline in oceanic oxygen, the bleaching of more coral reefs and the accelerated meltdown of the Arctic.

There Is Only One Atmosphere

The question of where Tar Sands pollution goes is particularly critical for the success of the Paris Agreement. The Kinder Morgan pipeline would increase the shipping of Alberta bitumen elsewhere where its burning will release carbon into the global atmosphere we all breathe. And there’s only one atmosphere.

In December 2015 in Paris, the countries of the world agreed to keep the warming of the planet to below 2°C above pre-industrial levels and pursue the aspirational goal to limit the temperature increase to 1.5°C. But that is not going very well. For that to happen, global GHGs must peak by 2020 and the gap must be closed by 2030. We are simply not on the right trajectory according to the UN Environment 2017 Emissions Gap Report.

Trudeau has called Kinder Morgan a “trade off” for his national carbon plan saying we can both build the pipeline and still hit our Paris targets. In a recent National Observer interview, David Suzuki said “we’re not going to make it” when asked about our Paris targets.

That’s such a lot of bullshit! this is just political doublespeak: ‘We’ve got to keep burning more oil, more fossil fuels, in order to meet our reduction targets.’ What are you talking about? That’s such a crock of shit! ~ David Suzuki