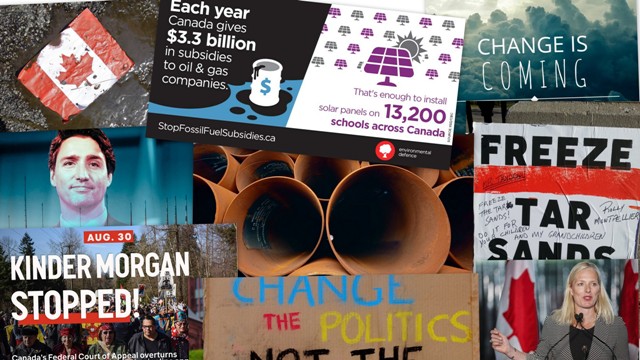 “If you care about debt, you wouldn’t leave credit-card debt to your kids. That’s exactly what climate change is,” said Catherine McKenna (Minister of the Environment and Climate Change) in a recent interview with Bloomberg Environment. And she’s right. We do not want to burden our kids and grandkids with financial debt. Nor do we want to burden them with environmental debt. And yet Canada’s climate politics are doing just that.

The Trudeau government climate plan is an incoherent blend of actions that concurrently promote fossil fuel expansion and carbon emissions reductions. This is not what progressive climate action looks like. Trudeau’s not-to-do list is well documented in this post published by Mitchell Beer in The Energy Mix. The list was initially produced as a 13-point to-stop list by Policy Options.

While Prime Minister Justin Trudeau and his cabinet try to patch together a to-do list to salvage the Trans Mountain pipeline expansion in light of last week’s Federal Court of Appeal decision, Policy Options is out with a 13-point to-stop list they really ought to consider, drawn up by The Energy Mix publisher Mitchell Beer.

“The Trudeau government came to power with a two-part to-do list on climate and energy. It promised to re-engage with global climate action, arrive at a Canada-wide climate plan, and support a thriving cleantech industry, while clearing a path for continued fossil fuel and pipeline development,” Beer writes.

But three years in, “it’s lagging on the first part of that plan and doubling down on the second.” While watering down the country’s new carbon pricing plan, delaying controls on fossil industry methane emissions, and postponing parts of its vaunted Clean Fuel Standard, “Ottawa approved two pipeline expansions and ended up buying one of them, in a deal that resurrected the Trans Mountain project and the company behind it in a single swipe.”

That juxtaposition prompted Beer to suggest the things the Trudeau government should stop doing if it “still wants to get its climate agenda right”. The list includes: