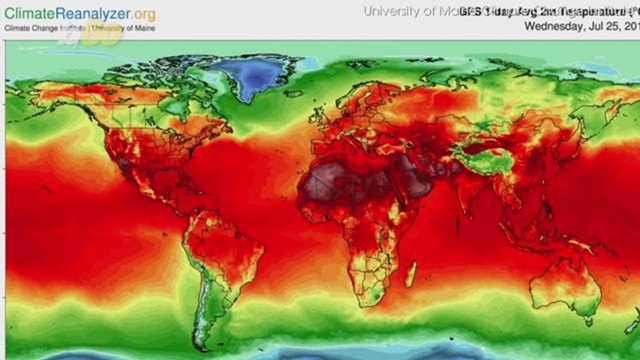 The summer of 2018 will be remembered as the first time global warming became front-page news around the world. “The impacts of climate change are no longer subtle. We are seeing them playing out in real time  in the form of unprecedented heatwaves, floods, droughts and wildfires,” says Michael Mann (Professor  & Scientist at Penn Sate University). We are staring into the face of climate change.

Staring Into the Face of Climate Change

Scientists are quick to remind us that the extreme weather events — heatwaves, wildfires, droughts, floods — that are wreaking havoc on a global scale this summer are not directly caused by climate change. But they are also eager to point out, with confidence, that global warming is amplifying their intensity and duration.

A recent study published in Proceeding of the National Acadamy of Sciences outlines the grim prospect of 10 climate processes that are happening now that could move the earth into a hothouse state beyond which the world’s efforts to reduce greenhouse gases will be increasingly futile. Joachim Schellnhuber (Director of Postdam Institute for Climate Impacts) is one of the authors of the Trajectories of the Earth System in the Anthropocene report.

“I think that in the future people will look back on 2018 as the year when climate reality hit,” said the veteran scientist. “This is the moment when people start to realise that global warming is not a problem for future generations, but for us now.”

A Salon articles reported in early August that “the crisis over global warming warrants an unparalleled response.”

The Northern Hemisphere has seen a succession of extreme weather events caused by unrelenting heatwaves in North America, Europe, Asia and parts of Africa.

Heatwaves in Canada, Algeria, Japan, the UK, Europe, the US and in Pakistan and India (earlier in the year) killed thousands of people. For the second year in a row, California’s Death Valley recorded the hottest July ever reaching an average temperature of 42.2C (108.1 Fahrenheit). In April of this year, Pakistan recorded Earth’s warmest month ever with temperatures reaching 50.2C in the city of Nawabshah. The Saharan city of Ouargla in Algeria recorded 51.3C, believed to be the highest ever measured in Africa.

Such extreme temperatures are behavior-changing. Humans and animals suffer under such sweltering heat. People stay inside when air cooling is available and animals begin to migrate to cooler places at higher altitudes. “Not long ago, 50C was considered an anomaly, but it is increasingly widespread,” reports The Guardian in its recent Halfway to boiling: the city at 50C featured article.

The last four years have been the hottest ever recorded and 2018 is shaping up to be the 4th hottest year on record. But in spite of this sweltering heat, new research shows that the planet has actually been in a global warming pause that will end soon. Models now show that natural variabilities will make the next four years even hotter.

Europe: wildfires have been burning in the Netherlands, Portugal, Spain, Ukraine, Denmark, Finland, Poland, Britain, Estonia, Latvia and Germany. In July Greece declared a state of emergency as wildfires spread so quickly that people died as they tried to flee from their burning villages. The fires killed at least 92 people.

Arctic Circle: Sweden is the worst affected country as intense wildfires rage throughout the Arctic during the record-breaking heatwave affecting much of the Northern Hemisphere. Siberia has seen a wave of extensive wildfires (estimate of 10 million hectares burning in July) producing smoke that reached Canada and the U.S.

California: Three of the biggest fires ever are still burning. The state is in the middle of another record-breaking fire season – 820,000 acres, more than double the area at the same point in 2017.

British Columbia: After the worst wildfire season ever recorded in 2017, the summer of 2018 has already seen 600 more fires than 2017. And it’s far from over. Thick smoke from fires has made visibility poor for days on end forcing the grounding of firefighting aircraft and making it impossible for crews to work safely. Flight cancellations and delays were necessary at several airports as smoke blanketed portions of the province. Air quality conditions in some regions led to a very high health-risk rating of 10 or higher on August 19. Conditions have forced Premier Horgan to declare a provincial state of emergency to tackle the ongoing wildfire situation. 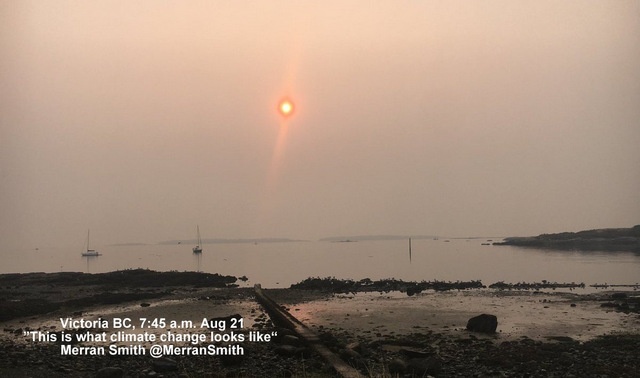 In July, flooding and landslides in Japan caused over 225 deaths. Millions were evacuated as some regions received up to 20 inches of rain.

In late August, floods caused over 1000 deaths in seven Indian provinces during this year’s monsoon rains. The rainfall in some regions was more than double the usual monsoon volume displacing millions from their homes. Elsewhere around the globe heavy rains and damaging winds caused flash flooding, levees and dams to break, high water rescues, evacuations and loss of life. In Toronto, a month’s equivalent of rain (2-3 inches) fell in three hours on August 7.

For the very first time known to humans, the Arctic’s thickest and oldest sea ice, also known as “the last ice area” is breaking up just north of Greenland. Climate scientists are alarmed by the spikes in temperature produced by this year’s heatwave leading to temperatures up to 20C higher than average.

This is an anomaly among anomalies ~ Michael Mann.

Observation is Different from Prediction

After a scorching summer of death and destruction caused by persisting and endless heatwaves, I am left wondering whether this is the summer that will break the back of climate deniers. In his opinion piece in TheGuardian, Michael McCarthy writes that “the blazing summer of 2018 has led to a shift in tone from some rightwing sceptics who can no longer deny the obvious.” He claims that the perspective on the climate is shifting from “projections” to “observations”.

Predictions contain a large degree of uncertainty that has given climate sceptics the ammunition to deny climate change or the need to take action. But observation is quite different. “Seeing things happening around you cannot be gainsaid like predictions can, and in this remarkable summer of 2018, events in the real world have been starting to catch up with the climate models’ forecasts of an overheating globe, says McCarthy.

Much of our world is hot. It’s flooding and it’s on fire. We are seeing the face of climate and we can no longer look away.