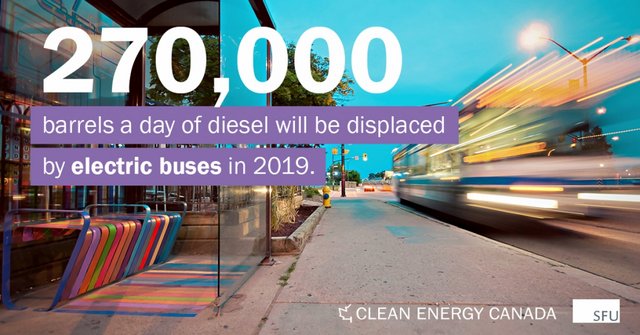 A report from Clean Energy Canada, Will Canada Miss the Bus?  warns that Canada runs the risk of “missing the bus” on a massive economic and environmental opportunity. Electric buses do two things: they cut pollution and they are an economic gold mine as the world demand for E-buses skyrockets.

As Executive Director of Clean Energy Canada, Merran Smith argues that the timid approach to electric buses (e-buses) by Canadian transit operators, compared to other cities globally, is threatening Canada’s position in a very competitive e-bus market. The following piece was first published as a media release.

Electric buses are making a real—and rapidly growing—dent in emissions. As reported in March, electric buses will displace 270,000 barrels of diesel a day by the end of this year.

But despite being home to four prominent electric bus manufacturers, Canada’s transit fleets have been slow to adopt this climate-change-fighting technology, lagging behind others around the world.

It’s a missed opportunity to both cut carbon pollution and support our growing electric bus companies—like Quebec’s Lion Electric and Vancouver’s GreenPower—by creating a stronger market for them at home.

#Paris: The new 800 buses make up the biggest electric bus purchase in #Europe. Diesel cars will be banned from 2024. And petrol cars from 2030. #EVs @wef #belikeparis pic.twitter.com/A1Q4vFrieS

But there are signs of leadership at home. Montreal, for example, has committed to providing 100% zero-emission transit by 2040.

For now, many Canadian electric buses are sold to California, leading Canadian companies to open manufacturing facilities abroad rather than in Canada.

Though it is just a start, the $2.2 billion in [the recent] budget earmarked for infrastructure funding—including transit—is an opportunity to accelerate Canada’s transition to electric buses.

More policies to encourage electric buses in Canada would not only help us fight climate change but also create opportunities to save money in the long run. Electric buses have many advantages, not the least of which are significant fuel, environmental, and health cost savings, helping offset higher—but quickly falling—upfront costs.

Clean Energy Canada’s new report, Will Canada Miss the Bus?, delves into the current use of electric buses at home and around the world, exploring the opportunities they present for Canadian manufacturers, transit operators, and riders.

“Canada is lucky to have a handful of innovators in this space building the next generation of buses, but we’re also at risk of falling behind other countries. Supporting electric buses is about more than just cutting pollution—though that’s a big one. It’s also about saving money in the long run, being healthier, and helping our homegrown manufacturing industry become competitive on a global scale. Now what we need is leadership at all levels of government, so that Canadians don’t miss the bus.”

RESOURCES
Report | Will Canada miss the bus?
Op-ed |How Canada is both leading and falling behind on electric buses