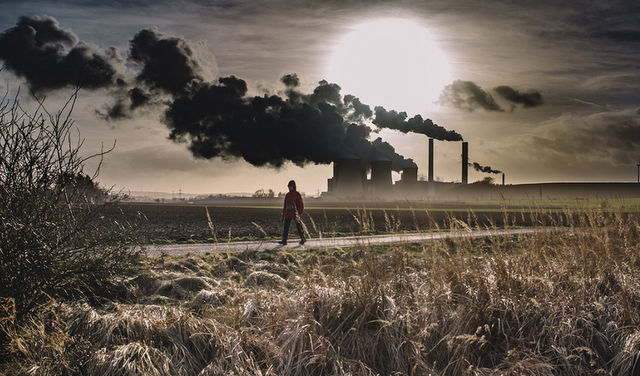 Canada is a small country with only 0.5% of the world’s population. And yet, we’re hitting way above our weight by producing 1.6% of global emissions – a full 3 times more than our population. Some Canadians argue that we’re too small to have any meaningful impact on reducing greenhouse gases. But this argument is only valid if you’re looking for an excuse to do nothing – nothing to save the planet from climate breakdown and nothing to ensure a clean future for your children and grandchildren. (Below2C Editor)

This article by Brendan Frank (first published on EcoFiscal blog) focuses on the moral and economic arguments for doing one’s share regardless of size.

Canadians have strong moral and economic arguments for reducing our greenhouse gas emissions. But how could Canada’s seemingly minor share of global emissions (about 1.6%) possibly be of consequence? What do our actions matter? Quite a bit, actually, and we can slice the data in different ways to show why.

We’re also the only country in the top 10 with a population under 100 million, and the highest per-capita emitter in the group. Canada, home to 0.5% of the world’s people, produces 1.6% of its emissions. We make an outsized contribution to the problem. 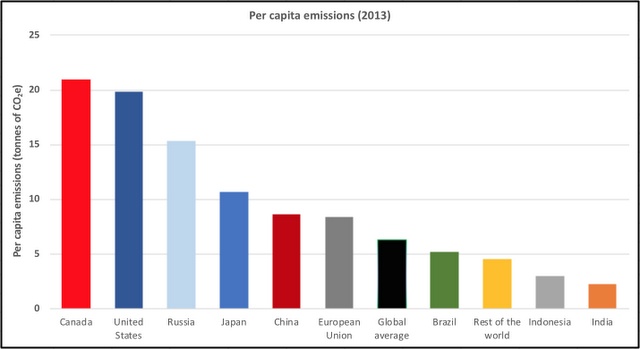 We emit more than our fair share. So what?

I’ve yet to hear anyone suggest that China’s 25% share of global GHG emissions isn’t an issue. More often, we hear them cited as the chief problem. If we can agree that China’s 25% is consequential, we should be able to agree that 30%—the contribution of all non-top-10 nations—matters, too.

If Canada balks at climate leadership claiming that 1.6% isn’t enough to matter, we’ll hand every smaller country a more potent version of the same argument. Some 180 nations could collectively reason that they aren’t the problem, either. Imagine our obstinacy, rather than our initiative, becoming an example to the world.

Not only is Canada a top-10 emitter, it has a top-10 economy, and it so happens that it’s underpinned by fossil fuels. Tackling our emissions doesn’t mean undoing our prosperity, but it does mean reconciling our economic fortunes with the side effects. Telling countries that didn’t have the benefit of abundant, cheap energy to reduce their emissions and adapt to the new climate normal, without pressing ahead with our own policies? That’s a tough sell, to say the least.

First, we need to reduce the risks of catastrophic climate change. This means responsibly reducing our emissions, and bracing ourselves for the inevitable climatic shifts we’ve wrought so far. At least the ones we can foresee.

There’s not much we can do about the GHGs we’ve produced to date. But as Joel Wood has pointed out, every tonne of GHGs we mitigate from now on has benefits.

Instead of focusing on Canada’s negligible impact on global temperatures, we should consider the very real damages caused by every additional tonne we produce, and the very real benefits of every tonne we save. These incremental changes are more than mere symbolism; they will help reduce the intensity of more predictable extreme events like coastal flooding, droughts and increased disease transmission.

Conversely, if Canada doesn’t act meaningfully on climate change, it could face political and economic obstacles in the future. For example, countries that have already implemented carbon pricing could start using border carbon adjustments, forcing carbon costs onto Canadian exporters or slapping them with other punitive tariffs. This isn’t some theoretical exercise, either. Countries will start trying it.

Limiting these risks and uncertainties means implementing practical, common-sense, low-cost policies as soon as possible, and strengthening them over time. This logic holds for every country, including Canada.

Second, we want to capture as much of the financial upside as we can. Meaningful action on climate change could be a significant economic opportunity for those who can keep pace. Here, we can think selfishly as the global market for low-carbon innovation grows.

Two economic arguments, one glass-half-empty, another glass-half-full. Addressing both means getting a handle on our 1.6%, sharing what we learn, and selling what we make.

Think of your household budget or your business expenses. If you could trim 1.6% of your costs, wouldn’t you? Pennies make dollars. Tonnes make megatonnes. There are plenty of arguments for Canada to ramp up our climate policy. And the notion that we’re doing this alone is simply false. Other top-10 emitters aren’t sitting idle.

Our lifestyles are energy-intensive; they don’t have to be emissions-intensive. The costs of us acting are real, but small. We can wean ourselves off now, gently, and embrace our chance to do more with less.

Acting on Canada’s 1.6% is an opportunity to improve our long-term economic prospects, and demonstrate that a low-carbon economy is doable and desirable. The world has a lot of heavy lifting ahead. Canada—one of the world’s premier emitters—should flex its muscles.

Having the world’s highest per capita emissions should really matter to  Canadians. It is an untenable position from which to claim to be a climate leader on the world stage. We are a small nation but let us not be small in our goals and expectations. (editorial comment)

You’re never too small to make a difference – Greta Thunberg

What do a speeding train and emissions have in common?
Massive gap between Canada’s emission projections and Paris goals