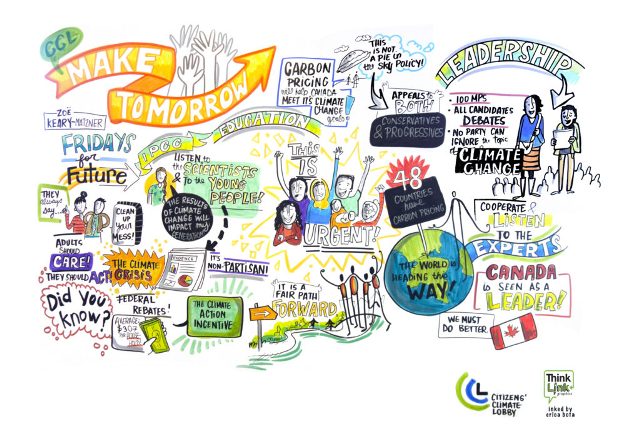 As a volunteer lobbyist with Citizens’ Climate Lobby Canada, I (and my colleagues) regularly meet with Members of Parliament to discuss carbon pricing, climate policy, the transition to clean energy, fossil fuel subsidies and Canada’s emission-reduction targets. Helping politicians meet the most urgent challenge of our time is our goal. Our lobby group always has a leave-behind-one-pager that lists our current asks. But this time, the leave-behind is different. It embodies a thread of urgency, a #WeDontHaveTime message, a #WeMustStayBelow2C wish.

Most Urgent Challenge of Our Time

We are in a global emergency. Youth, scientists, local governments and citizens worldwide demand major changes to keep global warming below 1.5 °C and to save our future from worldwide ecological collapse. Recent reports, such as the IPCC 1.5°C Report, Canada’s Changing Climate report, the UN 1 Million Species Extinction report and the latest Mauna Loa CO2 reading of 415 ppm, highlight the need for immediate action.

As of May 6, 2019, climate emergencies have been declared in 382 Canadian communities, covering over 10 million people. In August 2018, teenager Greta Thunberg from Sweden sparked the global Fridays for Future movement by striking from school to demand that leaders protect her future. On May 3, 2019, thousands of youth in 97 Canadian cities engaged in a nationwide strike. An international global Earth Strike is set for September 27.

Our present challenge calls for a whole suite of beneficial solutions. With the right policies, including pricing carbon as a core component of a cost-effective climate plan, we can help save lives, improve health, conserve nature, promote equity and be poised to capture part of the 26 trillion dollar opportunity in climate smart growth by 2030.

Why Carbon Fee and Dividend

A carbon fee offers the most cost-effective lever to reduce carbon emissions at the scale and speed that is necessary. Fairness and political viability are maximized by returning all revenues as dividends or equal rebates to Canadians. Most families, including the most vulnerable, receive more in dividends than they pay in increased energy costs.

In Canada, Carbon Fee and Dividend has been endorsed by Canadians for Clean Prosperity, Canada’s Ecofiscal Commission and the Post Media editorial board.

We appreciate Canada being a world-leader on carbon pricing, the Greenhouse Gas Pollution Pricing Act and the two years of negotiations for the Pan-Canadian Framework on Clean Growth and Climate Change.

CCL Canada is grassroots, nonpartisan and volunteer-run. We are here to help in this time of massive change.

It’s time to treat the climate crisis as the nonpartisan issue that it truly is.