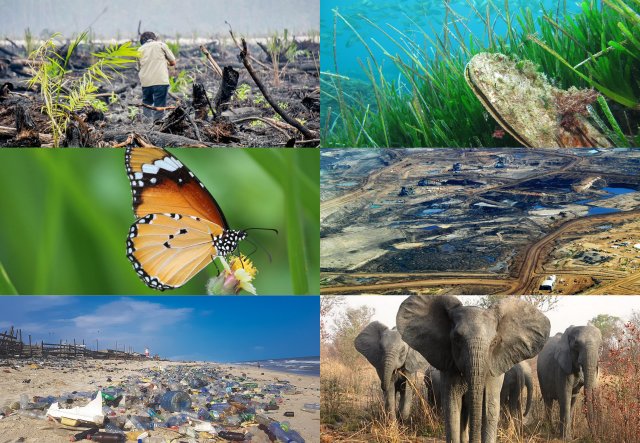 One million species are being driven to extinction by human activities according to a landmark report by the UN’s IPBES (Intergovernmental Science-Policy Platform on Biodiversity and Ecosystem Services). The rate of species extinction and the decline in biodiversity are speeding up, “with alarming implications for human survival”, reports the Washington Post. There is no future without nature writes Stephen Leahy is his recent article featured in National Geographic. (Editor intro)

No Future Without Nature

The bonds that hold nature together may be at risk of unraveling from deforestation, overfishing, development, and other human activities, a landmark United Nations report warns. Thanks to human pressures, one million species may be pushed to extinction in the next few years, with serious consequences for human beings as well as the rest of life on Earth.

“The evidence is crystal clear: Nature is in trouble. Therefore we are in trouble,” said Sandra Díaz, one of the co-chairs of the Global Assessment Report on Biodiversity and Ecosystem Services. A 40-page “Summary for Policy Makers” of the forthcoming full report (expected to exceed 1,500 pages) was released May 6 in Paris.

Based on a review of about 15,000 scientific and government sources and compiled by 145 expert authors from 50 countries, the global report is the first comprehensive look in 15 years at the state of the planet’s biodiversity. This report includes, for the first time, indigenous and local knowledge as well as scientific studies. The authors say they found overwhelming evidence that human activities are behind nature’s decline. They ranked the major drivers of species decline as land conversion including deforestation, overfishing, bush-meat hunting and poaching, climate change, pollution and invasive alien species.

The tremendous variety of living species—at least 8.7 million, but possibly many more—that make up our “life-supporting safety net” provide our food, clean water, air, energy, and more, said Díaz, an ecologist at the National University of Cordoba in Argentina, in an interview. “Not only is our safety net shrinking, it’s becoming more threadbare and holes are appearing.”

A world of green slime?

In parts of the ocean, little life remains but green slime. Some remote tropical forests are nearly silent as insects have vanished, and grasslands are increasingly becoming deserts. Human activity has resulted in the severe alteration of more than 75 percent of Earth’s land areas, the Global Assessment found. And 66 percent of the oceans, which cover most of our blue planet, have suffered significant human impacts. This includes more than 400 dead zones—where scant life can survive—that collectively would cover the state of Oregon or Wyoming.

The new report paints “an ominous picture” of the health of ecosystems rapidly deteriorating, said Sir Robert Watson, Chair of the Intergovernmental Science-Policy Platform on Biodiversity and Ecosystem Services (IPBES), which conducted the global assessment. IPBES is often described as the equivalent of the Intergovernmental Panel for Climate Change for biodiversity and does scientific assessments on the status of the non-human life that makes up the Earth’s life-support system.

“We are eroding the very foundations of our economies, livelihoods, food security, health, and quality of life worldwide,” Watson said in a statement.

“My biggest personal concern is the state of the oceans,” Watson told National Geographic. “Plastics, dead zones, overfishing, acidification… We’re really screwing up the oceans in a big way.”

Protecting nature and saving species is all about securing the land and water plants and animals need to survive, said Jonathan Baillie, executive vice president and chief scientist of the National Geographic Society. Protecting half of the planet by 2050, with an interim target of 30 percent by 2030, is the only way to meet the Paris climate targets or achieve the UN’s Sustainable Development Goals for the world, Baillie said.

Forests, oceans, and other parts of nature soak up 60 percent of global fossil fuel emissions every year, the report found. “We need to secure the biosphere to protect the climate and help buffer us from extreme weather events,” Baillie said.

Coral reefs and mangroves protect coastal areas from storms such as hurricanes. Wetlands reduce flooding by absorbing heavy rainfall. Yet each of these ecosystems has declined dramatically, with wetlands down to less than 15 percent of what they were 300 years ago and coral reefs facing a global bleaching crisis.

Nearly 100 groups around the world (including the National Geographic Society and the Wyss Campaign for Nature) have endorsed the goal of protecting half of the planet by 2050. Recently, 19 of the world’s leading scientists published a study to make a science-backed plan for an interim step that would protect 30 percent by 2030 under what’s called a Global Deal for Nature. The proposed protection does not mean “no go” areas, but rather areas protected from resource extraction and land conversion. Sustainable uses would be permitted in all but the most sensitive areas, the groups wrote.

“The international community has both the time and the tools to safeguard nature and slow the ongoing wildlife extinction crisis,” Brian O’Donnell, director of the Wyss Campaign for Nature, said in a statement.

National Geographic Society and the Wyss Campaign for Nature are working together to inspire the protection of 30 percent of the planet by 2030.

Such tools were under discussion during the week-long negotiations by IPBES country members who debated the key messages and policy options to be published in the “Summary for Policymakers.” The full Global Assessment report will be published later this year.

“The main message of our report is that transformative change is urgently needed. There are no other options” said David Obura, a marine biologist at the Coastal Oceans Research and Development – Indian Ocean in Mombasa, Kenya. “There’s so little time left to save corals. If we can save corals we could save everything.”

In order to safeguard a healthy planet, society needs to shift from a sole focus on chasing economic growth, the summary report concludes. That won’t be easy, the report acknowledges. But it could get easier if countries begin to base their economies on an understanding that nature is the foundation for development. Shifting to nature-based planning can help provide a better quality of life with far less impact.

Putting that concept into practical terms, the report says countries need to reform hundreds of billions in dollars in subsidies and incentives that are currently given to the energy, fishing, agricultural, and forestry sectors. Instead of driving additional exploitation of the world’s natural resources, those monies should be shifted to incentivize protection and restoration of nature—such as underwriting new reserves or reforestation programs, the report said.

Can we change what we value?

“We need to change what we value: nature, ecosystems, social equity, not growing the GDP,” Obura said.

The other evidence gathered by IPBES shows that nature managed by indigenous peoples and local communities is in generally better health than nature managed by national or corporate institutions, despite increasing pressures, said Joji Cariño, a senior policy advisor at the Forest Peoples Programme, a human rights organization.

At least a quarter of the global land area is traditionally owned, managed, used, or occupied by indigenous peoples. However, their land tenure and other rights are not always protected or recognized by all countries. Nor is their deep knowledge of the land and their values often considered in policies and decisions by governments. That needs to change, the Global Assessment noted.

Yet countries still are slow to recognize this, she adds. As an example, she points to the Philippines. Forty years ago, indigenous people there stopped construction of dams on the Chico River because they were concerned about impacts on their land. Yet those dams are now being built by China under their trillion-dollar Belt and Road infrastructure initiative.

China has an important role to play in global discussions around biodiversity, because the country will host a major United Nations conference called the UN Convention on Biological Diversity in late 2020. Scientists hope a new, ambitious international agreement to protect the planet could happen there, akin to the Paris agreement around climate.

Assessment co-chair Díaz doesn’t yet know if a global agreement will arise as bold as protecting 30 percent by 2030. “If it were easy it would have already happened,” Diaz said.

“However, the evidence is clear: the future will be bad for us if we don’t act now. There is no future for us without nature.”

The decline in biodiversity is eroding “the foundations of our economies, livelihoods, food security, health and quality of life worldwide.” ~ Robert Watson, British chemist.