“Aggressive action to address climate change could save the world $145 trillion,” wrote Dana Nuccitelli in a recent article published in Yale Climate Connections. 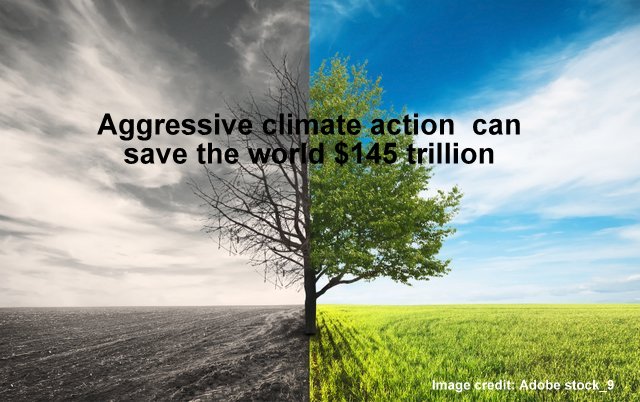 Climate solutions are expensive investments in the short run but will yield huge long-term savings, according to new research by Project Drawdown.

A respected research group, Project Drawdown, finds that deploying solutions consistent with meeting the Paris climate targets would cost tens of trillions of dollars globally. But crucially, those outlays would also yield long-term savings many times larger than the up-front costs. 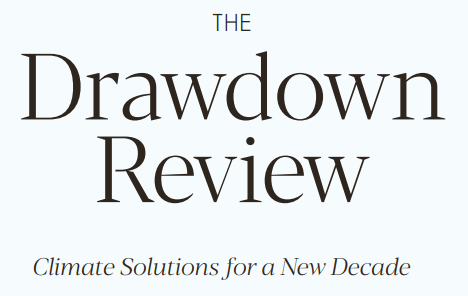 The new 2020 Drawdown Review includes economic estimates of the capital costs to deploy each solution, net lifetime operation costs, and lifetime profits from the sale of products produced by the agricultural solutions. The key conclusion is that while the upfront costs are substantial – around $25 trillion globally – the resulting savings and profits are five to six times larger.

Project Drawdown is a nonprofit organization that evaluates climate solutions nations could deploy to reach the point where greenhouse gas levels in the atmosphere begin to decline (the threshold of carbon “drawdown”). Achieving drawdown will require phasing out the use of fossil fuels that add carbon and strengthening the natural sinks that absorb carbon. In 2017, the group published the New York Times bestselling book Drawdown, which described the 100 most substantive solutions to global warming based on a comprehensive scientific review by the project’s research team.

Two pathways, one realistic, one aspirational

The new Drawdown Review considers two potential pathways. Scenario 1 envisions how climate solutions could be deployed to meet the Paris target of staying below 2 degrees Celsius (3.6 degrees Fahrenheit) hotter than pre-industrial temperatures, in which the point of carbon drawdown is reached in the mid-2060s. Scenario 2 is more ambitious, keeping global temperatures below the aspirational Paris target of 1.5 degrees C (2.7 degrees F) by achieving carbon drawdown in the mid-2040s. In the more aggressive Scenario 2, global economic savings are $145 trillion, with an additional $29 trillion in profits generated from the agricultural sector – the latter on its own offsetting the initial $28 trillion capital costs. Both the Scenario 1 and 2 savings estimates are calculated over the life times of the solutions.

Without even accounting for the many trillions of dollars saved by improving public health and avoiding climate damages—better public health savings not factored in— the researchers estimate that keeping global temperatures below the 1.5 degrees C target would result in a global net economic savings of $145 trillion.

In a few cases, the savings come almost immediately. For example, LEDs may cost more than the less efficient light bulbs they replace, but because they last so much longer, buying an LED is cheaper than repeatedly replacing equivalent shorter-lived bulbs. The Drawdown Review estimates that replacing older lighting technologies with LED bulbs would save $2 trillion dollars globally in capital costs, plus another $5 trillion in the long term as a result of improved energy efficiency.

Most of the other climate solutions in the Drawdown Review have significant capital costs that are more than offset by lifetime use savings and/or profits. Solar panels and wind turbines, for example, have much lower operation and maintenance costs than the fossil fuel power plants they replace. As a result, the Drawdown Review estimates that over their lifetimes, the onshore wind turbines and utility-scale solar panels deployed in Scenario 2 would save $8.5 trillion and $28 trillion globally, respectively, along with another $13 trillion saved by distributed solar panels (e.g. installed on building roofs). Some of the other most cost-effective solutions include improving building insulation, which would save another $23 trillion by increasing energy efficiency, and electric cars, which would save $16 trillion by replacing less efficient gasoline-powered vehicles.

Much of the difference between the two Drawdown Review scenarios boils down to the speed at which wind and solar energy are deployed. In the more aggressive Scenario 2, onshore wind turbines and utility-scale photovoltaic panels are the two largest sources of reduced carbon emissions. This scenario envisions the share of global electricity from wind increasing sixfold, from 4.4% today to 27% by 2050, and solar farms exploding from just over 1% today to 25% in 2050. In Scenario 1, each would supply about 20% of global electricity by 2050.

Some of the other top climate solutions in the Drawdown Review may come as a surprise to some. They include reducing food waste, improving health and education, eating plant-rich diets, refrigerant management, and tropical forest restoration.

The diversity of the Project Drawdown solutions makes clear that there is no “silver bullet” to solve the climate crisis – only silver buckshot. Even the biggest individual solutions like onshore wind turbines contribute less than 10% to the overall carbon reductions in the Drawdown scenarios. That’s why Drawdown evaluates 100 different solutions.

The good news is that these studies show that climate solutions are investments with a high rate of return.

And if the world makes those investments, the Paris targets could still be within reach.