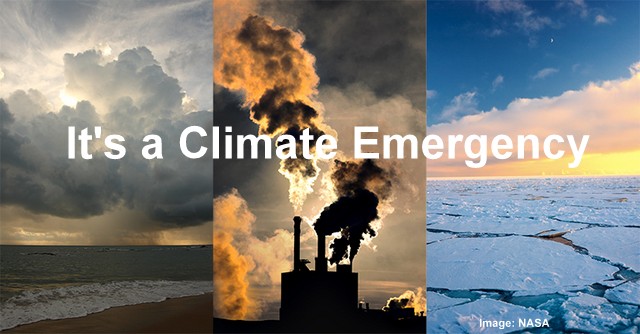 “Slow-walking action on climate has almost the same impact as outright denial,” writes Sara Hastings-Simon in a recent op-ed for the CBC News. Hastings-Simon is a senior researcher at both the Payne Institute for Public Policy and the School of Public Policy at the University of Calgary. She warns of developments that are, in fact, “a form of climate delay masquerading as action.”

“Unlike outright climate denial, “climate delay” acknowledges the reality of a changing climate and the role of carbon emissions from human activity in climate change. But instead of actively working to deal with the issue…the end goal is to significantly delay action to reduce emissions.” — Sara Hastings-Simon

Hastings-Simon’s opinion piece is particularly relevant in light of the recent throne speech from the Trudeau government labelled as “the most progressive speech from the throne heard in a generation,” by Catherine Abreu of the Climate Action Network-Canada (CAN-Rac). Abreu “welcome[s] the news that the government will immediately release its plans for exceeding Canada’s 2030 climate goal, as well as move forward legislation to reach zero emissions by 2050.”

Many climate groups have been quick to applaud the Liberal government for its bold announcements on tackling the climate emergency—creating a million green jobs, developing a plan to exceed our 2030 climate goals, and legislating Canada’s climate targets—which was declared over 15 months ago in June of 2019. But Canadians must wait even longer before they see the emergency version of Canada’s climate plan.

From The Energy Mix – Globe and Mail columnist Adam Radwanski concluded there was relatively little new in a speech that still clarified the priorities the government will set on climate and energy. “For all the recent work of environmental policy experts to come up with ways to seize this moment of crisis to expedite the shift to a cleaner economy, the government’s imperative is mostly to get on with its old ones,” he wrote. “It will attempt to do so by underscoring economic benefits of climate policy more than it has previously, as part of a broader pledge to create a million new jobs.” And so, the emergency is now in a holding pattern.

Normally an emergency calls for immediate action but none followed the announcement, leading one to conclude that Trudeau’s Liberals were not serious about climate change in 2019. In fact, the complete opposite happened. Less than 24 hours after the emergency declaration, Trudeau approved the massive expansion of the Trans Mountain pipeline expansion (TMX).

Since the signing of the Paris Agreement in 2015, Canada’s climate performance has been dismal—delay after delay and a litany of broken promises.

Canada has missed all its climate targets and greenhouse gas emissions continue to rise. We are less Paris-compliant now than we were when the Paris Accord was adopted in 2015. Recorded at 729 megatonnes of CO² equivalent in 2018, emissions are now the highest since 2007. 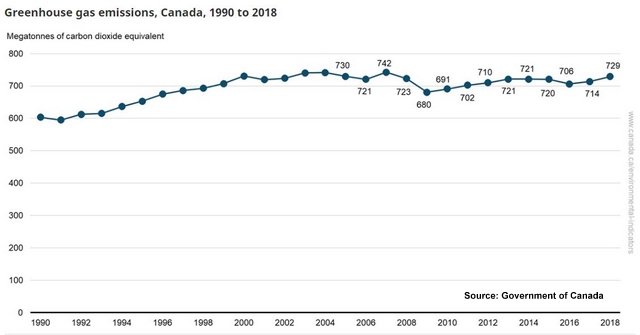 A year ago, during a meeting with Greta Thunberg, Trudeau promised the planting of two billion trees by 2030. “Just under 600,000 trees should have been planted every day since September 2019, if the government was to reach its stated goal,” according to La Presse. To date, not a single tree has been planted. “So far, crickets,” reports the National Post.

The gap between promise and reality continues to taint this government’s climate intentions. Only a week after renewing its commitment to fight climate change in its Throne Speech, the federal government is urging the courts to throw out a case brought by a group of young Canadians—15 youths and teenagers from across Canada— claiming their right to a safe, stable climate has been violated.

And less than a week following the Throne Speech, which promised that climate action would be the cornerstone of our green recovery, “Canada has signed on to a G20 energy communiqué led by Saudi Arabia that endorses fossil industry bailouts,” reports Mitchell Beer of The Energy Mix. The communique “contains not a single use of the word “climate”, makes no reference to the G20’s now 11-year-old promise to phase out “inefficient” fossil fuel subsidies,” writes Beer.

What did the government of Canada do when it became aware of the COVID-19 emergency? It recognized a public health emergency. It did not delay. It acted immediately as anyone of us would after hearing of a serious life-threatening medical diagnosis.

Many observers had seen the government’s handling of the corona crisis as a possible template for the battle plan needed to tackle the climate crisis. Prompt decisive actions and firm controls based on science have contributed to Canada’s success in dealing with the worst public health epidemic in generations.

“This was a key moment for Canada to show we have learned from experience and set the course for years to come,” but “the government has turned its back on the bold, green, and inclusive recovery that had been in preparation since June,” said outspoken Senator Rosa Galvez, appointed in 2016. “I fear this government is letting the transformational opportunity of this crisis go to waste, and that we will all pay for it for generations to come.”

It is far too soon for any of us involved in the climate movement in Canada to take a victory lap. “We need to see the Trudeau government match their words with bold action,” says 350 Canada campaigner Atiya Jaffar. “Words are not enough, we need to see action.’

In his recently-released book, A Good War: Mobilizing Canada for the Climate Emergency, author Seth Klein writes that “the primary “enemy” or force we contront at this juncture is an insidious way of thinking and practice that plagues our politics and economic policy-making—a dynamic I call the new climate denialism…the result is the continuing sorry state of Canadian political non-leadership on the defining challenge of our time.”

It has now been 473 days since Canada’s declaration of a climate emergency.  And counting!