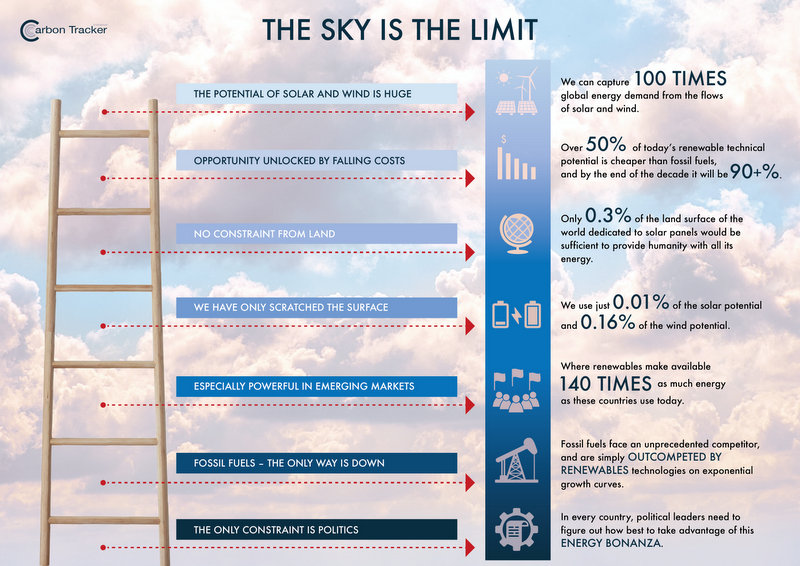 “The world does not need to exploit its entire renewable resource — just 1% is enough to replace all fossil fuel usage. Each year we are fuelling the climate crisis by burning three million years of fossilised sunshine in coal, oil and gas while we use just 0.01% of daily sunshine.” – Harry Benham, co-author of The Sky’s the Limit report and chairman of thinktank Ember-Climate.

(This piece is sourced from the Carbon Tracker website page of the release of The Sky’s the Limit: Solar and wind energy potential is 100 times as much as global energy demand report, an email to members and the report PDF — Editor)

The Sky’s The Limit

Electricity demand is measured in Terawatt hours (TWh) per annum. A PWh is 1,000 times a TWh.

Solar and wind are inexhaustible sources of energy, unlike coal, oil and gas, and at current growth rates will push fossil fuels out of the electricity sector by the mid-2030s. By 2050 they could power the world, displacing fossil fuels entirely and producing cheap, clean energy to support new technologies such as electric vehicles and green hydrogen.

Key Findings of the report – Solar and Wind

There is a huge new cheap energy resource available. With current technology and in a subset of available locations we can capture at least 6,700 PWh p.a. from solar and wind, which is more than 100 times global energy demand.

The opportunity has only just been unlocked. The collapse in renewable costs in the last three years means that half of this solar and wind technical potential now has economic potential, and by the end of the decade it will be over 90% of it.

People will take advantage of the cheap energy. Humans specialise in extracting cheap energy, and fast, as witnessed by the rapid development of shale gas. Now that the opportunity has been unlocked, expect continued exponential growth of solar and wind deployment.

The tide is coming in fast. The technical and economic barriers have been crossed and the only impediment to change is political. Sector by sector and country by country the fossil fuel incumbency is being swamped by the rapidly rising tide of new energy technologies.

The fossil fuel age is over. The fossil fuel industry cannot compete with the technology learning curves of renewables, so demand will inevitably fall as solar and wind continue to grow. At the current 15-20% growth rates of solar and wind, fossil fuels will be pushed out of the electricity sector by the mid 2030s and out of total energy supply by 2050.

“We are entering a new epoch, comparable to the industrial revolution. Energy will tumble in price and become available to millions more, particularly in low-income countries. Geopolitics will be transformed as nations are freed from expensive imports of coal, oil and gas. Clean renewables will fight catastrophic climate change and free the planet from deadly pollution.” — Kingsmill Bond, Energy Strategist, Carbon Tracker

ICYMI:
A Just Transition To Clean Energy
100% Solar, Wind, and Batteries is Just the Beginning
Five Developments To Really Feel Good About 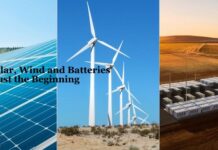 100% Solar, Wind, and Batteries is Just the Beginning 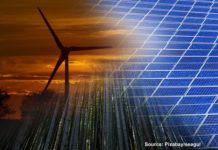