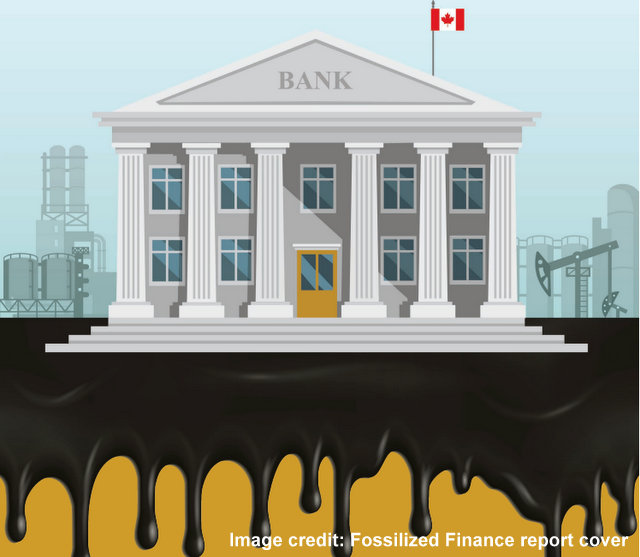 “Despite Canada’s climate change commitments, the country’s “big five” banks continue to finance and support the expansion of fossil fuel industries,” writes Donald Gutstein in a recent report: Fossilized Finance – How Canada’s banks still enable oil and gas production. The report was commissioned by CCPA (BC Office), the Corporate Mapping Project and the Parkland Institute.

(The article is sourced from the Fossilized Finance report and media release information at the time of its release.)

The key word in the report title is “still”. While the banking sectors in many other countries have committed to helping the world meet the goals of the Paris Agreement on climate change, Canada’s Big Five banks have not joined in. Gutstein’s report explains why: Canada’s big banks continue to rely on profits from financing the fossil fuel industry despite the danger those investments pose for the future of our planet.

Canada’s Big Five banks—RBC, TD, Scotia, BMO, CIBC—are perhaps the most powerful corporate entities in Canada, certainly among the largest and most profitable. Rather than playing a crucial role to help Canada achieve its Paris Agreement commitments to reduce greenhouse gas emissions to 40-45 per cent below 2005 levels by 2030, the Big Five are hindering our progress on reducing emissions.

For more on fossil banks, see the Banking on Climate Chaos 2021 report here.

Canada’s big banks continue to be steadfast supporters of the fossil fuel industry, in both financial and non-financial realms.

They increased their lending and lending commitments to the industry by 53 per cent to a record high of $137 billion in 2020.

They continued to pour $54 billion of their clients’ money into shares of the top 15 Canadian fossil fuel and pipeline companies in  2019.

They continue to provide financial advice to the industry, an important function during economically tough times.

The banks and the fossil fuel industry are deeply intertwined in Canada. Donald Gutstein

Two of the banks, TD and RBC, recently pledged to net-zero emissions by 2050, but recent actions call into question the sincerity of these commitments. TD increased its lending to the industry by 160 per cent over seven years to a total of $33 billion in 2020, and RBC invests the most in fossil fuel and pipeline companies to a tune of $21 billion as of November 2019.

These forms of financial support from the banks are allowing fossil fuel development, and therefore emissions, to continue to grow. “It’s past time the banks treated climate change like the threat it is,” writes Gutstein.

Way beyond the realm of normal financial transactions

Banks missing in action on Climate

In September 2019, during the UN Climate Action Summit in New York, the CEOs of 131 banks signed the Principles for Responsible Banking, committing them to align their businesses with the goals of the Paris Agreement on climate change and the UN’s Sustainable Development Goals. One principle requires banks to review how they are doing in meeting these principles and be held accountable for their contribution or lack thereof to society’s goals. In Canada, only National Bank and Desjardins Group, the Québec-based federation of credit unions, signed the documents. The Big Five were missing in action.

Evidently they felt no urgent need to change direction. Yet urgency is required, as the United Nations Environment Programme’s Emissions Gap Report has starkly pointed out and the Expert Panel on Sustainable Finance has reiterated. For Canada’s big banks, it’s business as usual—they have expressed no willingness to abandon fossil fuel financing.

What about investments in renewables?

Inevitably, banks have begun financing renewable energy projects. Proposals began coming to them to finance hydropower, wind, solar, thermal and other renewable endeavours. If the proposals made financial sense, banks would provide financing.

Pressures from international agencies, governments, investors and environmentalists finally made them take action, starting with TD Bank’s first green bond in 2014. By 2020, all the banks were doing green bonds. In 2017, the idea of a $100-billion commitment to environmental, social and governance (ESG) goals took hold, and by 2020 all the banks were doing $100-billion commitments.

Finance is not going to solve climate change, but it has a critical role to play in supporting the real economy through the transition [to a low-emissions future]. — Final Report of the Expert Panel on Sustainable Finance