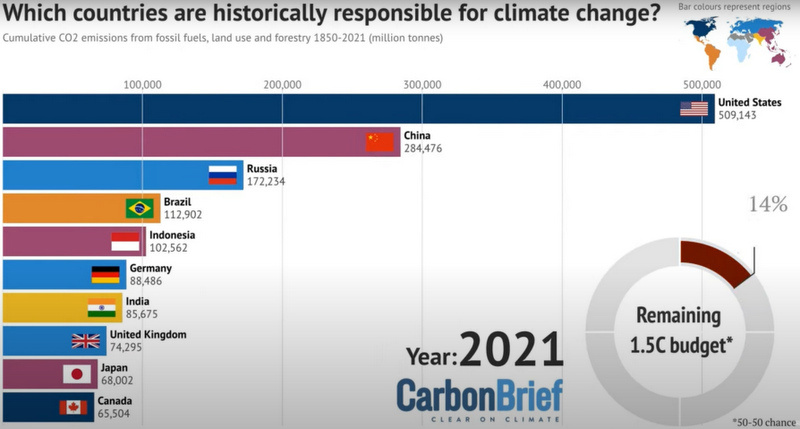 Climate justice has evolved from the idea that the responsibility for climate change should lie with the world’s worst climate offenders—the wealthy and the powerful. And yet the poorest and the most vulnerable are disproportionally impacted by global warming.

(This article is sourced from a Carbon Brief analysis and is part of a week-long series on climate justice.)

Historical responsibility for climate change is at the heart of debates over climate justice.

History matters because the cumulative amount of carbon dioxide (CO2) emitted since the start of the industrial revolution is closely tied to the 1.2°C of warming that has already occurred.

In total, humans have pumped around 2,500bn tonnes of CO2 (GtCO2) into the atmosphere since 1850, leaving less than 500GtCO2 of remaining carbon budget to stay below 1.5C of warming.

This means that, by the end of 2021, the world will collectively have burned through 86% of the carbon budget for a 50-50 probability of staying below 1.5C, or 89% of the budget for a two-thirds likelihood.

In this article, Carbon Brief looks at national responsibility for historical CO2 emissions from 1850-2021, updating analysis published in 2019.

For the first time, the analysis includes CO2 emissions from land use and forestry, in addition to those from fossil fuels, which significantly alters the top 10.

In first place on the rankings, the US has released more than 509GtCO2 since 1850 and is responsible for the largest share of historical emissions, Carbon Brief analysis shows, with some 20% of the global total.

Which countries are historically responsible for climate change?

China is a relatively distant second, with 11%, followed by Russia (7%), Brazil (5%) and Indonesia (4%). The latter pair are among the top 10 largest historical emitters, due to CO2 from their land.

Meanwhile, large post-colonial European nations, such as Germany and the UK, account for 4% and 3% of the global total, respectively, not including overseas emissions under colonial rule.

These national totals are based on territorial CO2 emissions, reflecting where the emissions take place. In addition, the analysis looks at the impact of consumption-based emissions accounting in order to reflect trade in carbon-intensive goods and services. Such accounts are only available for recent decades, even though trade will have influenced national totals throughout modern history.

The analysis then explores the figures in relation to population, where the likes of China and India fall down the rankings. Notably, per-capita rankings depend strongly on the methodology used and – unlike cumulative emissions, overall – these figures do not relate directly to warming.

Finally, this article presents a detailed explanation of the data behind the analysis, where it comes from and how it was put together, including assumptions, uncertainty and changing borders. The data analysis includes the following categories:

The term “climate justice” captures the various ways in which global warming impacts people differently and the approaches that can be taken to address this problem “fairly”. (from article: Why does climate justice matter?)

In  his weekly Zero Carbon newsletter Chris Hatch writes “You often hear government, industry and cranky uncles arguing that Canada is but a teensie part of the global problem. It’s a compelling argument for those predisposed to gradual, nondisruptive change.” However, the Carbon Brief analysis dispels that myth by showing Canada as the 10th worst climate offender. “It’s not a top 10 list to be proud of,” writes Hatch.

ICYMI:
Is COP26 the Answer We’ve Been Waiting For Or a Dangerous Fantasy?
Two Fatal Flaws with Net-Zero By 2050: Net-Zero and By 2050