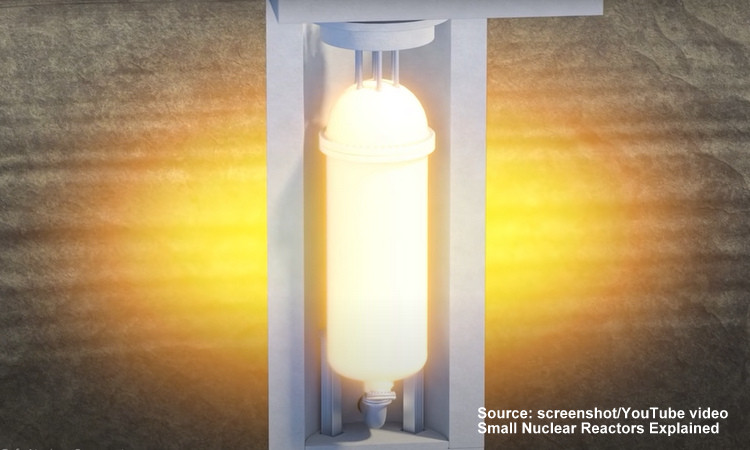 Rather than taking the draconian steps needed to cut fossil fuel emissions, Canada will spend billions on false and unproven solutions that fail to address the climate crisis. According to the Canadian Environmental Law Society, a number of groups say “next generation” nuclear reactors are a dirty, dangerous distraction from tackling the climate crisis. Nuclear energy is not green, not clean, too costly and too slow to build.”

This post is sourced primarily from a recent media release issued by Northern Services Legal Counsel (CELA), the Coalition for Responsible Development in New Brunswick (CRED-NB) and the Canadian Coalition for Nuclear Responsibility (CCNR).

The Government of Canada is further delaying climate action with an announcement of $27 million in funding to develop a Small Modular Nuclear Reactor (SMR). There is no guarantee SMRs will ever produce energy in a safe and reliable manner in Canada.

During his remarks for the announcement, François-Philippe Champagne, Minister of Innovation, Science and Economic Development Canada, as well as Westinghouse representatives, said that the technology to be developed, the e-Vinci reactor by the Westinghouse Electric Company, will be suitable for remote Indigenous communities currently using diesel energy.

However, research has demonstrated that small modular nuclear reactors such as the type Westinghouse is proposing are not the energy answer for remote communities. The researchers—Froese, Kunz & Ramana (2020)—concluded that the economics of SMRs do not compete when compared with other alternatives. The cost of electricity from SMRs was found to be much higher than the cost of wind or solar, or even of the diesel supply currently used in the majority of these communities.

Many of these remote communities currently using diesel energy are First Nations. In December 2018, the Assembly of First Nation Chiefs in Assembly passed resolution 62/2018, demanding that the Nuclear Industry abandon its plans to operate Small Modular Nuclear Reactors in Ontario and elsewhere in Canada, and demanding that the Government of Canada cease funding and support of the Small Modular Nuclear Reactors program.

Other Indigenous communities, including the Chiefs of Ontario, have passed resolutions  opposing funding and deployment of SMRs.

Public interest and Indigenous groups across Canada say funding SMRs will divert critical funds away from renewable energy projects which are safe, proven and scalable now – which is key if Canada is to meet its climate target of 40 to 45% emissions reductions by 2030. It is impossible for an SMR to be developed in Canada by that date.

This funding announcement comes on the heels of the latest report from the Intergovernmental Panel on Climate which was unequivocal: climate change is a threat to human well-being and planetary health. The urgency of the climate crisis means Canada must prioritize solutions that are economical and quick to deploy. Small Modular Nuclear Reactors fail on both counts.

To date, more than  120 public interest, Indigenous and civil society organizations from coast to coast to coast have endorsed a public statement against federal funding for new nuclear reactors, noting new nuclear energy is too slow to address the climate crisis, and renewable alternatives provide more jobs, quicker pathways to net zero, and avoid the concerns about weapons proliferation.

SMRs are untested and unproven new versions of old reactor designs, producing anywhere from 1 MW to 300 MW of electricity. Despite the vendors’ claims their designs will be cleaner and safer, they will still produce long-lived radioactive waste and require protection from liability for the federal government and Canadian taxpayers in the event of an accident.

Similar recommendations to halt government financing of SMR projects have been made by the Green Budget Coalition (GBC) of 23 leading Canadian environmental and conservation organizations. Their budget recommendations for 2022 included that the federal government “eliminate funding for Small Modular Nuclear Reactors – and reallocate investments towards renewable technologies that are proven, socially acceptable and scalable now.”

“The nuclear industry is promoting a nuclear fantasy to attract political support while purging past failures—like cost overruns and project delays—from public debate. Before Canada invests any public dollars in this yet-to-be-developed technology, they must fully evaluate the costs of nuclear spending and liabilities associated with the construction, oversight, and waste of this novel technology.” Kerrie Blaise, Northern Services Legal Counsel, Canadian Environmental Law Association

“Funding new nuclear technologies is a bad investment – a waste of both time and money, that delays real climate action. Canadians want affordable energy that does not pollute the environment. Why would we invest in unproven technologies that, if they ever work, will cost two to five times more than building proven renewables? Indigenous leaders across the country oppose building nuclear reactors or storing nuclear waste in their territories because it contains ‘forever’ radioactive poisons.” Prof. Susan O’Donnell, Coalition for Responsible Energy Development (CRED) in New Brunswick

“Studies have shown that electricity from small modular reactors will be more expensive than electricity from large nuclear power plants, which are themselves not competitive in today’s electricity markets. There is no viable market for small modular reactors, and even building factories to manufacture these reactors would not be a sound financial investment.” M. V. Ramana, School of Public Policy and Global Affairs, University of British Columbia

ICYMI:
Four Senior Nuclear Officials Say Nuclear Is Not A Climate Solution
Nuclear Power Is Not A Responsible Investment
Spending $1.8 Trillion A Year To Finance Our Own Extinction