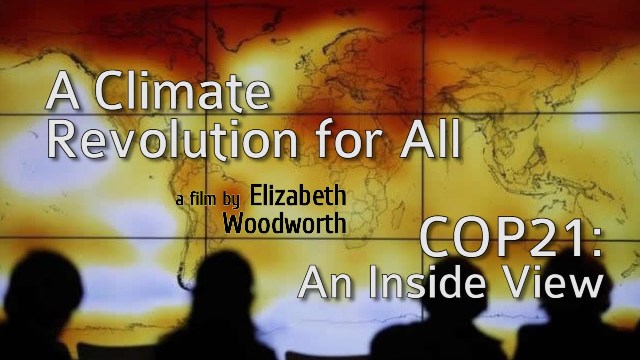 Elizabeth Woodworth is a Canadian writer/librarian who attended the COP21 summit in Paris. Elizabeth is also my Facebook friend. We’ve developed a working relationship and supported each other in our respective work dedicated to a global climate revolution for all. Some time ago, Elizabeth arranged for me to receive Unprecedented, Can Civilization Survive the CO2 Crisis? directly from author David Ray Griffin — a remarkable must-read book which shows how we can have 80 percent clean energy by 2035 and 100 percent by 2050.

More recently she was in Paris during the world’s most important climate conference ever — truly a global climate revolution. She lived those rare moments when some 195 countries were able to sign a climate agreement which is the first step in combating the perils of climate change on an increasingly hostile planet suffering from over-exploitation and escalating global warming.

In the following three video extracts, you will witness her first-hand experience and unique citizen’s overview of the Paris Agreement — the world’s most intense historical event in decades. Woodworth brings together COP21’s amazing successes and inevitable shortcomings, then points to complementary actions that may be taken now to speed up national responses to global warming. You can view the full 47 minute video at this link:  A Climate Revolution for All.

Global Climate Revolution — The Challenges Ahead

This video extract includes a unique approach to mobilization of climate action to supplement the COP21 agreement that was presented by climate scholar Dr. David Griffin in his 2015 book, “Unprecedented: Can Civilization Survive the CO2 Crisis?” (Clarity Press). This book can spark the global climate revolution so badly needed at this point in humanity’s evolution.

These videos may contain copyrighted material the use of which has not been specifically authorized by the copyright owner. This material is being made available within this transformative or derivative work for the purpose of education, commentary and criticism, is being distributed without profit, and is believed to be “fair use” in accordance with Title 17 U.S.C. Sect 107.