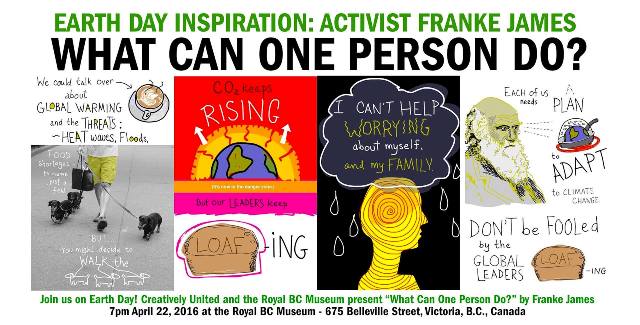 This post is a reproduction of a media kit released by Citizens Climate Lobby Canada to commemorate Earth Day. Because of the climate crisis encroaching on our civilization, I believe that every day should be Earth Day. We must tackle head on the dangers and opportunities that lie ahead.

Across the country children are picking up litter and planting trees, oblivious to the dangerous brink civilization is at. Most adults should know that a catastrophic crisis is looming. But do they really know how close we are now? The world is at a crossroads: danger and opportunity lie ahead.

Every Day is an Earth Day

On Earth Day, Canada is one of the countries at the United Nations in New York City, alongside over 170 countries, including the USA and China, to submit our national climate plan. But Canada will be submitting inadequate targets of greenhouse gas emissions (GHG) reductions: 30% below 2005 levels in 2030. Our inadequate targets are not consistent with interpretations of an equitable approach to reach a 2°C pathway, let alone the 1.5 °C pathway Canada committed to at the climate talks in Paris. And, a February 2016 report from Environment Canada indicated that Canada is not on target to meet even our inadequate goals.

A window of opportunity has opened. In March, Prime Minister Justin Trudeau and all territorial and provincial Premiers signed the Vancouver Declaration on Clean Growth and Climate Change. They all confirmed that meeting Canada’s climate targets must remain a priority — and devised next steps. By October 2016, Canada will have a national price on carbon. How effective that carbon price is will set the stage for future growth in clean tech jobs in Canada. Since 2008, Canada has lost 48% of its global share of the clean tech market.

Meanwhile it seems a new form denialism may be at work in Canada: one meant to persuade the public that new fossil fuel infrastructure is necessary, and climate change is perhaps not that serious. PM Trudeau, in the absence of clear plans for tackling the climate crisis, is seemingly convinced oil pipelines are a priority.

Opposition to oil pipelines in the past decade is rooted mostly in the climate crisis and First Nations sovereignty. Without a socially, economically and scientifically balanced national climate and energy plan, any plan for pipelines will be met with resistance because the politicians and industrialists who want these pipelines do not have the social license to proceed.

The Dangers Are Out There

Global temperature records were obliterated in February 2016. The average surface teimperature of the Earth north of the equator was 2C above normal during that month.

After an unusually warm Arctic winter, the 2016 Arctic sea ice extent is breaking records. Greenland is experiencing its earliest start to spring melting by a longshot – almost two months ahead of schedule – marking the first time Greenland spring melting has begun in April.

Warm summer weather in the Southern Hemisphere has led to the worst bleaching ever of the Australian Great Barrier Reef impacting more than half of the reef severely, changing this glorious reef forever.

Scientists are not alarmists: they have ESLD. In a 2012 study scientists were found to be scientifically biased to Err on the Side of Least Drama towards cautious estimates. In February 2016, Sir Nicholas Stern, author of the 2006 Stern Report on the Economics of Climate Change published in the journal Nature: Current Climate Models are Grossly Misleading. He called on scientists and engineers to make better climate models to help policymakers make better decisions.

A new cloud analysis study in Science found that climate models have underestimated the roles clouds play in warming. Thus warming is now predicted to be worse than predicted in previous models. A 2016 study published in the journal Nature warns that, if GHG continue at their current pace, the collapse of the Antarctic ice sheet could drive sea levels 2 meters higher by the end of the century. The Lancet published a study predicting that food shortages from climate change could result in 500,000 deaths less than four decades from now.

The rate at which carbon emissions are rising is the highest in 66 million years, eclipsing the Paleo-Eocene-Thermal Maximum (PETM) of 56 million years ago when feedback loops kicked in. Temperatures rose considerably during the PETM and resulted in a 5C increase and massive acidification and death in the oceans over a geologically short time period, 10,000 years. On our current trajectory, humanity is on track to push global temperatures up by approximately 4.8C above pre-industrial temperatures by the end of this century – thus in 350 years (1750 -2100).

In April 2016, in a Nature article, the first estimate from economic modeling found that climate change could cut the world’s financial assets between $2.5 – 24 trillion USD. These are direct losses from extreme weather events.

A new study theorizes that climate change might be moving the position of the earth’s axis, giving new meaning to the term “tipping point.”

These are the facts Citizens’ Climate Lobbyists across Canada face head on. The planet is in a crisis and currently, the poor are being impacted: 10 million Ethopians will run out of food in May because of climate change. We must act now. We have hope, based on fact there is still time but not much, and that we can mitigate climate crisis in time. Since 2010 we have been sharing a solution with Parliamentarians.

The myth is busted. Canada can grow the economy and protect the environment. The world, including Canada, can convert to 100 per cent renewable energy – from wind, water and solar by 2050 and save money at the same time according to a November 2015 study from Stanford University.

Check this out: Standard & Poor (S&P) reported in January 2016 that the Paris Climate deal will unleash $16.5 trillion dollars in clean tech investment globally over the next 15 years. Just imagine what will happen when there is a clear market signal for clean tech investment via a transparent carbon price.

In February 2016, Sir Nicholas Stern said: “The twin defining challenges of our century are overcoming poverty and managing climate change. If we can tackle these issues together, we will create a secure and prosperous world for generations to come. If we don’t, the future is at grave risk.”

Currently, the Ontario Environmental Law Association is warning that time is running out to make sure Ontario’s cap and trade policy for carbon emissions doesn’t push more people into poverty.

Carbon fee and dividend is a revenue neutral price on carbon pollution which:

The predictably increasing carbon price will send a clear market signal to fuel innovation and investment in the clean energy economy without burdening taxpayers. Most Canadians, especially the poor, will receive more in the dividend than their increase in costs. Thus Carbon fee and Dividend will also reduce inequality.

An April 2015 study from Canada’s Ecofiscal Commission determined that the Canadian economy would grow by an additional 3.7% by 2020 with a well-designed carbon pricing policy compared to using regulatory mechanisms to reduce carbon emissions.

Enough with the climate brinkmanship. Opportunity is knocking. Political will for a low carbon economy and carbon pricing is beginning to manifest in unlikely places.  It’s time to price carbon transparently and carve out our slice of the global multi-trillion-dollar clean tech industry.