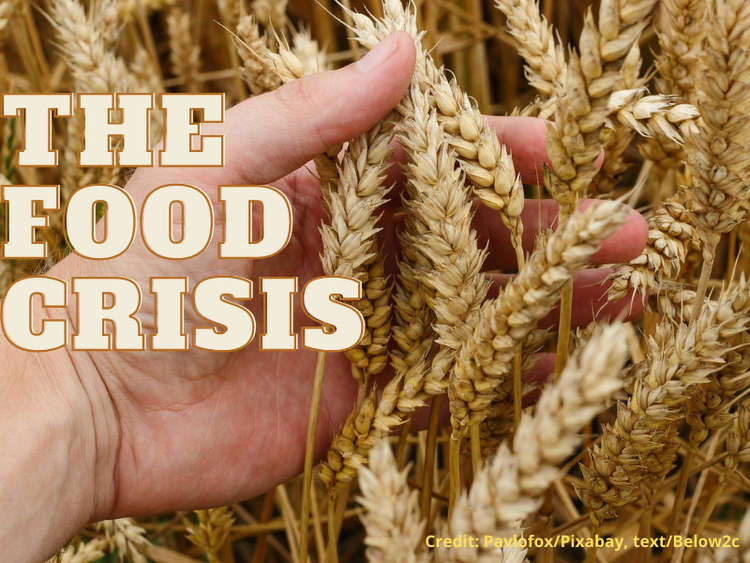 According to the UN Food and Agriculture Organization (FAO), roughly 750,000 people around the world are facing a food security “catastrophe,” meaning that “starvation, death, destitution and extremely critical acute malnutrition levels are evident,” writes The Energy Mix in this recent piece about diminishing food supplies and famines.

(This post is sourced from Need-to-Know series authored by Stephen Leahy.)

Food Crisis: prices are 34% higher than a year ago

Food prices are at the highest since the U.N. Food and Agriculture Organization started recording them in 1990. In fact, the prices in its Food Prices Index—a measure of the most commonly traded food commodities— are literally off the chart. 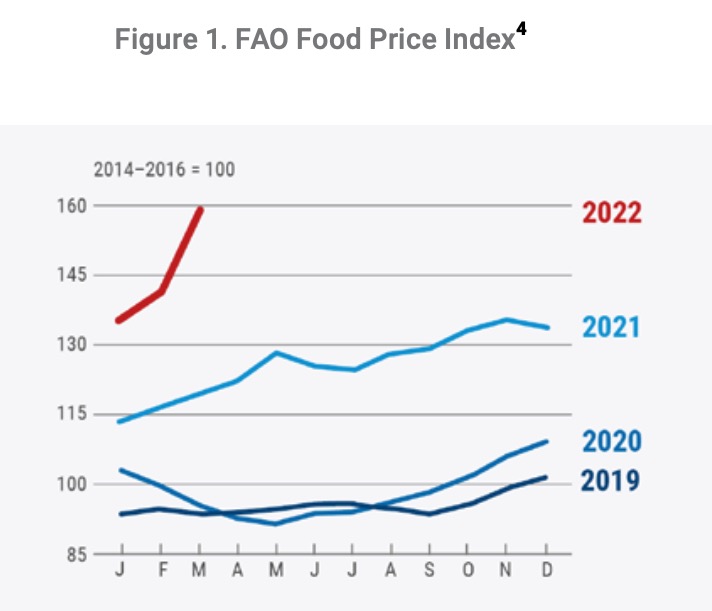 As many as 1.7 billion people in 107 countries face large-scale crisis from record-high food and energy prices and growing levels of debt. These countries, mostly in Africa, Asia and the Pacific, and Latin America and the Caribbean, had already been struggling with impacts of the pandemic crisis and climate change.

Exposure to just one additional risk is enough to cause debt distress, food shortages or blackouts, according to a preliminary analysis by the United Nations’ Global Crisis Response Group.

“All of this is hitting the poorest the hardest and planting the seeds for political instability and unrest around the globe.” —UN Secretary-General António Guterres.”

Grim stuff in what will be a challenging year ahead. Here’s some context. Of the world’s cereal crop production (rice, wheat, corn, etc) :

Of all the wheat, rice, corn, rye, oats, barley, sorghum grown in the US every year a mere 10% is eaten by people. The rest is for animal feed and biofuels.

One person is probably dying of hunger every 48 seconds in Ethiopia, Kenya, and Somalia according to a report Oxfam and Save the Children

Need-to-Know 1: 90% of crops grown in US is used for animal feed or biofuels.

The US converted 121 million tons of its corn crop into ethanol in 2019. Although considered a “green fuel”, ethanol’s lifecycle carbon emissions are no better than gasoline. Some studies say it is worse.

Globally, some 70 million acres of food-producing land is devoted to biofuels that provide less than 5% of the world’s transportation fuels.

Need-to-Know 2: 70 million acres of farmland is used for biofuels.

Plants convert approximately 0.023% of the sunlight energy they receive. A solar panel with 20% efficiency converts 20% of the sunshine it receives into electricity. The best solar panels on the market today can reach almost 25% efficiency.

(I did a real-world energy comparison between plants and solar panels — and had it vetted by experts.)

An acre of high-yield corn in the US midwest can be converted into 500 gallons of ethanol on average. If a vehicle could run on 100% ethanol, it would travel 8,750 miles on 500 gallons. (Ethanol has 30% less energy than gasoline.)

That is 160X more miles from solar on the same acre of land in this tank-to-wheels comparison. Among the reasons the Tesla could go 160X further is the 400% better energy efficiency of electric vehicles compared to gasoline or diesel-powered vehicles.

In other words, to match the annual travel distance of EVs recharged from 1 acre of solar, requires 160 acres of corn converted into ethanol. (Even accounting for losses from electricity transmission, battery charging and grid storage.)

Iowa uses 8 million acres to grow corn for ethanol. If Iowa put solar panels on just 50,000 acres that would generate the same amount of vehicle fuel as the 8 million acres of corn-ethanol. Plus no emissions. No fertilizers. No need to plant, water and fertilize a crop every year. BONUS: Iowa would have 7.95 million more acres to grow food people can eat.

Of course there’s more to the food crisis than reclaiming land from ethanol and other types of biofuel production but converting some of those acres to food production is a big part of solving the problem. Who the hell ever thought ethanol and biofuels was a good idea?

Agrivoltaics is also known as solar sharing, a practice that takes advantage of the synergies of co-locating agriculture and solar panels.

Solar panels elevated two to four metres (6 to 12 feet) above farm fields help food crops grow with less water. The plants can help panels produce up to 10% more energy because the panels stay cooler, according to studies.

Food prices are high and going higher. The war in Ukraine is making it worse but prices were climbing in 2021. Lots of reasons but one big reason is the tens of millions of acres used for ethanol that do nothing to reduce carbon emissions. A shockingly wasteful use of food-producing land. War and supply chain issues may end but the climate crisis is now a “persistent threat to food security.” 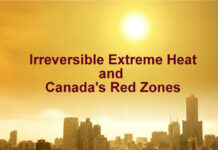