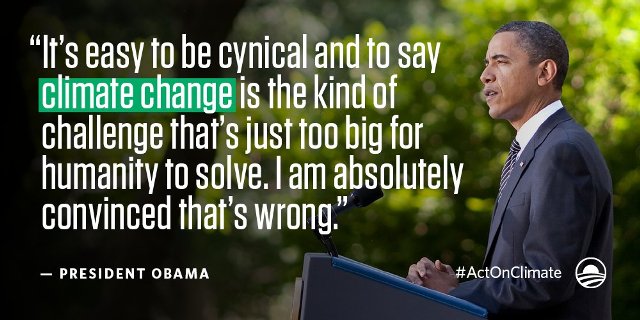 This post is reproduced from the Climate Reality Project. I’m a Climate Leader (Chicago2013). The article highlights President Obama’s top five climate accomplishments. Some, including myself, will argue that he could have and should have done a lot more. Nevertheless, he will be remembered as the Climate President. (Rolly Montpellier, Editor for BoomerWarrior).

President Obama has been serious about fighting climate change since he took office. While there’s undoubtedly more progress he’d like to see before the end of his term, he’s done more to address climate change than any US president before him.

Since President Obama took office, the US has made major strides in fighting climate change. Here are five ways.

Why Obama is the Climate President

Over the last eight years, the US has had its fair share of ups and downs in fighting climate change. But despite setbacks like the Senate’s failure to take up the American Clean Energy and Security Act in 2009 – which promised to introduce a nationwide emissions trading program to cut carbon pollution – there’s been a whole lot of progress too. And not all of it has appeared on the public’s radar.

Under President Obama’s watch, the US has expanded clean energy technologies, regulated carbon pollution from existing power plants for the first time, and passed major initiatives to improve energy efficiency – not to mention played a large part in the most ambitious international climate agreement to date, the Paris Agreement. But it doesn’t stop there. Let’s take a closer look at the steps the Obama Administration has made to accelerate clean energy in the US and fight climate change.

In 2014, the Environmental Protection Agency (EPA) released the Clean Power Plan, the first-ever standards to reduce carbon pollution from existing power plants. The EPA projected the plan would bring many, many benefits for Americans, including creating tens of thousands of jobs, saving US citizens as much as $155 billion in energy costs between 2020—2030, and helping prevent some 90,000 asthma attacks in children by 2030.

The benefits didn’t end at our borders, either, as the plan showed the rest of the world we were serious about reducing emissions, leading to a landmark climate deal with China in 2015 that helped energize international climate talks that led to the historic Paris Agreement last year. The plan also was a cornerstone of the US commitment to reduce overall emissions 26—28 percent below 2005 levels by 2025 in the agreement.

However, in February of this year, the US Supreme Court issued a judicial stay on the Clean Power Plan after 27 states’ attorneys general sued the EPA to block implementation. This means that implementation of the Clean Power Plan is on pause until the court decides when the case should continue. While this is a setback, we believe that the court will ultimately uphold the legality of the plan.

Between 2009 and 2014, companies mined enough coal on public lands to put more than 3.9 billion metric tons of carbon pollution into the atmosphere. That’s the equivalent emissions of over 825 million cars on the road – every year.

In January, though, the climate community had a major win when the Department of the Interior put a temporary freeze on leasing our public lands for coal mining. This moratorium is a big deal because when coal is burned for energy, it creates more carbon dioxide per unit than any other fossil fuel.

The bottom line is when we lease our federal lands for coal, we’re helping fuel climate change. Right now, the Department of the Interior is collecting comments on the moratorium, giving Americans the chance to weigh in on how we power our nation – and protect our planet. You can help. Take action against coal mining on public lands today and submit a comment to the Department of the Interior.

These new standards are the most ambitious any US president has implemented, and will save consumers money at the pump, decrease greenhouse gas emissions, and reduce US demand for oil.

The Obama Administration has focused on increasing energy efficiency not only to protect our environment, but also save Americans money and create jobs. One of the major ways the White House is accomplishing this is through the Better Buildings Challenge, a US Department of Energy initiative focused on making homes, commercials buildings, and industrial plants more energy efficient.

The Better Buildings Challenge is projected to improve energy efficiency in commercial buildings by 20 percent by 2020 through investments in upgrading offices, universities, hospitals, and other commercial buildings. It’s also projected to save companies and business owners about $40 billion per year on energy bills, which can be used to hire more workers and benefit companies in other ways.

This May, the EPA announced final regulations to curb harmful methane emissions from new and modified oil and gas facilities. These first-ever federal methane pollution standards are a big part of how the US will reach its goal of cutting this pollution by 40–45 percent from 2012 levels by 2025.

While there’s less methane than CO2 in the atmosphere, it’s much more powerful than carbon dioxide in trapping heat – 84 times more potent over 20 years, in fact. Which means it can still do a lot of harm to our climate. These new rules will help rein in the millions of tons of methane the oil and gas industry is leaking into the air, and is a big climate win for the Obama Administration – and all of us.