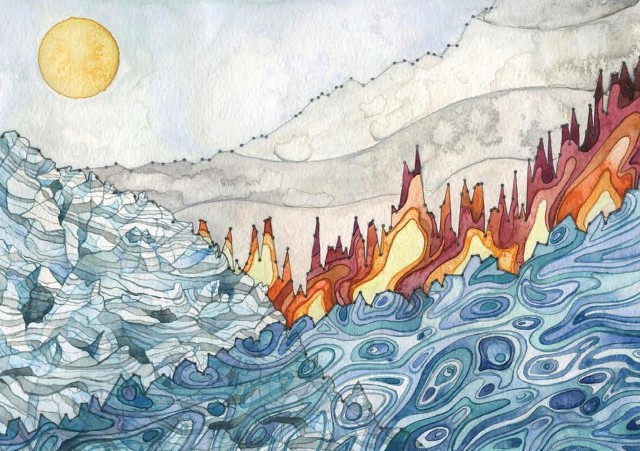 The planet is baking under relentless heat. We have severe dry conditions and droughts in broad areas around the entire globe. There is no end in sight to the current global heating trend. Our planet is on fire. The Earth is hot and getting hotter confirms the State of the Climate Report authored by some 450 scientists from 62 countries.

Credit: Cover for the State of the Climate in 2015 report

The Planet Is Baking

Such heating trends are truly distressing and alarming as climate change plays out before us. “The impacts of climate change are no longer subtle,” says Michael Mann, a leading climatologist at Penn State University. The annual State of the Climate Report confirms that 2015 surpassed 2014 as the hottest year on record. Carbon dioxide, sea levels and temperatures all hit new milestones according to the report.

Key findings of the report:

The first six months of 2016 have been the warmest half-year ever. June was the fourteenth consecutive month to shatter heat records. And 2016 will easily become the hottest year on record. This will be the earth’s third hottest year in a row.

Two key climate change indicators have broken numerous records through the first half of 2016, according to NASA analyses of ground-based observations and satellite data. Each of the first six months of 2016 set a record as the warmest respective month globally in the modern temperature record, which dates to 1880. Meanwhile, five of the first six months set records for the smallest monthly Arctic sea ice extent since consistent satellite records began in 1979. NASA researchers are in the field this summer, collecting data to better understand our changing climate.

The world is now 1C warmer than it was in pre-industrial times, primarily caused by a huge escalation in the production of greenhouse gases. The oceans, which absorb more than 90% of the extra heat, also reached new record temperatures.

The three main greenhouse gases that contribute to global warming are carbon dioxide, methane and nitrous oxide. And all three set new records in 2015. The Mauna Loa Observatory (which I visited in 2009) recorded more than 400 ppm of CO2 for the month of March — the first time since measurements began . The annual CO2 average for 2015 was 399.4 ppm — an increase of 2.2 ppm compared to 2014.

The burning of fossil fuels for energy has increased the concentration of carbon dioxide in the atmosphere by more than 40% since the Industrial Revolution.

Global sea levels continue to rise due to warming ocean temperatures and unprecedented Arctic warming and ice-melt. Oceans absorb about 90 percent of the heat trapped by greenhouse gases, primarily in the top 700 metres of water. The Global Mean Sea Level (GMSL) has risen by 4 to 8 inches (10 to 20 centimeters) over the last century. And the annual rate of rise is accelerating — roughly twice the average speed of the preceding 80 years.

Scientific research indicates that ocean levels will rise between 2.5 and 6.5 feet (0.8 and 2 meters) by 2100, enough to flood cities along the East Coast of North America. However, a complete meltdown of the Greenland ice sheet will push sea level rise to 23 feet (7 meters), enough to submerge London, reports National Geographic.

While our planet is baking, we continue to pay only casual attention to the imminent climate crisis. The world is careening towards an environment never experienced before by humans, reports theguardian. In a recent opinion piece, George Monbiot writes that the climate crisis is already here. And yet the media is distracted by the US election, Brexit, ISIS and the Rio Olympics.

What is salient is not important. What is important is not salient. The media turns us away from the issues that will determine the course of our lives, and towards topics of brain-melting irrelevance.

Eight months ago in Paris, 177 nations promised to try to ensure the world’s average temperature did not rise by more than 1.5C above the pre-industrial level. Already it has climbed by 1.3C – faster and further than almost anyone predicted. In one respect, the scientists were wrong. They told us to expect a climate crisis in the second half of this century. But it’s already here. (George Monbiot, author, columnist)