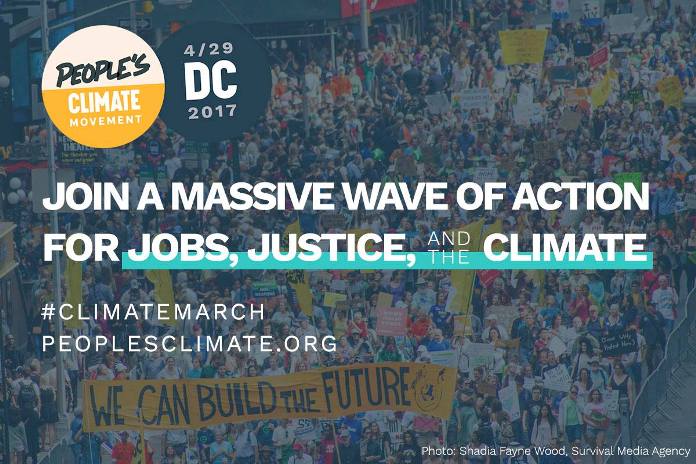 The timing of the Washington DC April 29th climate march is crucial. This will be viewed as the boldest and most important climate mobilization ever. Much has changed since the mass mobilization resulting from the 2014 People’s Climate March centered in New York City. The priority now is to protect climate gains already made before we can even aspire to greater progress in the fight against climate change.

The Washington event will be boosted by sister events staged across the world. One such event is planned for Ottawa (Canada).

For more on the Ottawa People’s Climate March, please click on the button below.

As the rate of warming of the planet continues to accelerate, it’s alarmingly clear that the emissions reduction targets (INDCs) set independently by countries in the Paris Agreement of 2015 are woefully inadequate. Countries submitted proposals which they pledged to implement at home but now it’s becoming obvious that additional measures will be required.

Even with those self-imposed climate targets, we are still heading for a 3-4 Celsius degree rise in global temperature, a far cry from the goal of limiting warming to well below 2C, or the aspirational goal of 1.5C. A lot more needs to happen and all countries must refocus on much more aggressive targets to submit in 2020. The Paris Agreement calls for parties to come together every 5 years to set more ambitious targets as demonstrated by the latest climate science.

If the rest of the world follows Canada’s or America’s post-Paris leads, then the planet is in trouble. World leaders have taken a rather lukewarm interest in maintaining the euphoria and momentum of the days following the Paris Agreement.

One could argue that Canada has shown leadership by adopting its Pan-Canadian Framework on Clean Growth and Climate Change. But it’s a rather lame plan which focuses more on business-as-usual economic growth than environmental protection. Prime Minister Trudeau is involved in a bewildering climate dance of promoting fossil fuel expansion to help finance the transition to clean energy by 2050.

The United States is at the other end of the climate action spectrum. In fact, President Trump has an anti-climate plan. He will either officially reject the Paris Agreement or just simply ignore it.

The call for climate action has never been greater. The overriding challenge of the PCM is protecting the climate gains already made. The focus for the People’s Climate Movement now turns to two crucial matters:

1. In the context of the Trump Administration’s climate change denying and a Congress controlled by the right-wing, it is clear we all must both protect the gains made in recent years, even if those have been limited gains, while we articulate and demand initiatives to move our nation to a new, clean energy economy. 2.This is a moment to bring the range of progressive social change movements together. Pushing back against the Trump agenda and at the same time pushing forward on our vision of a clean, safe world where the rights of all people are protected and expanded means we all must work together. (Source: People’s Climate Movement)

Looking Back at the 2014 People’s Climate March

As the Washington climate march quickly approaches, it’s important to remember the successes of the New York 2014 march.

The People’s Climate March took place on Sunday, September 21, 2014, in New York City. The event was the largest climate march in history in America with an estimated 400,000 participants from all walks of life hitting the streets of New York.  It was accompanied by similar actions worldwide. In total over 600,000 people, asking for bold and urgent action to address the climate crisis, marched to advocate for global action against climate change.

Writing in his “A Call to Arms” article featured in Rolling Stone in June of 2014, Bill McKibben predicted that the mobilization would be the “the largest demonstration yet of human resolve in the face of climate change.” He was right. He said then, and still believes today, that climate change is “the biggest crisis our civilization has ever faced.”

The 2014 Climate March set the stage for 3 major accomplishments. It helped reboot the climate movement in the United States and led to the success of the Paris Agreement one year later in December 2015. But even more importantly, it set the stage for the growth of the Peoples Climate Movement which is grounded in a set of core principles that has massive appeal.

The event was so large and so diverse that it could not be ignored by world leaders, giving them the space and clear mandate to take action on the climate. Climate change had finally risen to the top of the world’s agenda. The success of this massive world mobilization for the climate was a crucial step forward. It has set the template for future climate mobilizations.

And now all eyes turn to Washington for the April 29 climate event. So let’s join in and make the Washington action the most important ever. Let’s give world leaders a reason to keep their eyes on the climate ball. Let’s tell them that they must not and cannot ignore the call for climate action.