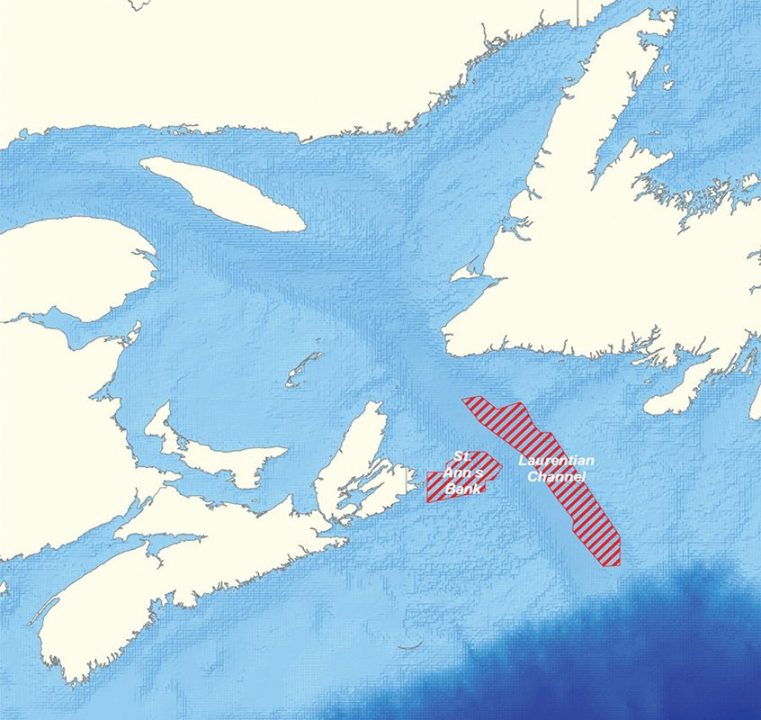 The oil and gas drilling announcement is reported in The Energy Mix and republished with permission.

The federal government has quietly approved oil and gas drilling in an area of the Laurentian Channel, off the southern coast of Newfoundland, that it is designating as the country’s largest marine protected area, covering 11,619 square kilometres of Canadian waters.

The revelation by WWF-Canada comes just days after France announced the imminent end to all new oil and gas drilling on its lands, including “offshore” territories like the Gulf of St. Lawrence islands of St. Pierre and Miquelon.

While proposed regulations governing the use of the area, released late last week, “ban commercial and recreational fishing activities,” the WWF asserts in a report by The Weather Network, they “allow oil and gas exploration in most of the territory.”

“We feel that oil and gas activities are not compatible with any marine protected area,” said WWF oceans specialist Sigrid Kuehnemund. “We’re not against oil and gas by any stretch, but we do feel that an oil and gas production platform does not belong within an MPA.”

Department of Fisheries and Oceans spokesperson Vance Chow responded that “there is no oil and gas activity taking place in the area at the moment, and any proposed projects would be subject to rigorous environmental assessment.” However, the department considers the effect of fossil exploration on the channel’s wildlife to be “reversible, due to the species’ behaviour,” TWN notes, citing the new draft regulations.

“Unlike coral, these species are mobile and can move away from noises and other disturbances,” the draft rules say. “Results from environmental effects monitoring programs from Newfoundland and Labrador offshore oil and gas production have shown no significant adverse effects.”

According to Chow, the area’s proposed regulations were “created in collaboration with Indigenous communities, fishing industry, oil and gas industry, environmental non-government organizations, stakeholders, and governments at all levels. Only activities that are determined to be compatible with the conservation objectives would be allowed to continue.”

In France, meanwhile, President Emmanuel Macron has determined “compatible” activities to be no new oil and gas exploration activities at all.

12 Reports You Should Know About As COP26 Unfolds