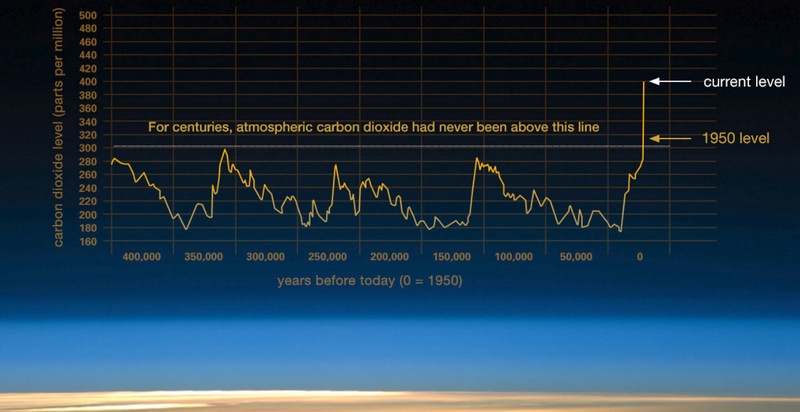 Concentrations of carbon dioxide in the atmosphere continue to rise reaching levels not seen for 800,000 years. Greenhouse gas concentrations reached 403.3 ppm in 2016 compared to 400.00 ppm in 2015 and 397.7 ppm in 2014.  This year’s numbers are likely to be surpassed next year and then the year after that and so on.

In a recent statement, Corinne Le Quere who is the lead researcher for the Global Carbon Project said that “with global CO2 emissions from all human activities estimated at 41 billion tonnes for 2017, time is running out on our ability to keep warming well below 2° Celsius (C), let alone 1.5°C,” the Paris Agreement targets set in 2015.

The globe has already warmed by one degree Celsius. But there is more warming, (at least another half degree according to experts), already locked in from decades of burning fossil fuels. And we’re still pumping an extra billion tons of CO2 into the atmosphere every 10 days.

So the world must do a lot more to bend the curve of rising emissions in time to prevent catastrophic climate events. Not only do we need to halt the rise of emissions, we have to reverse it. We have to start removing carbon from the atmosphere. We need negative emissions, a term that will become part of the climate dialogue for decades to come, in fact, for the rest of our lives. Carbon removal and carbon retrieval technologies, the objective of which is the large-scale removal of CO2 from the atmosphere, are evolving rapidly as nations begin to struggle with mitigation strategies.

“Carbon-removal plants could be built anywhere, or everywhere. Construct enough of them and, in theory at least, CO2 emissions could continue unabated and still we could avert calamity,” writes Elizabeth Kolbert in The New Yorker.

“The extent to which the world is counting on negative emissions is documented by the latest report of the Intergovernmental Panel on Climate Change”, writes Kolbert. IPCC modelling suggests that hundreds of billions of tons of carbon must be removed from the atmosphere and dealt with without producing secondary effects that are themselves harmful to life on the ground. For example, would storing extracted CO2 from the air underground affect water sources?

But still there’s “a compelling reason for putting carbon removal on the agenda,” says Kolbert. “We’re are already counting on it. Negative emissions are built into the I.P.C.C. scenarios and the climate agreements that rest on them.”

For many, the idea of negative emissions raises a moral dilemma. It may lead to putting off action needed to avoid catastrophic climate change. If removing carbon from the atmosphere becomes a substitute for reducing emissions or slows down the drive to replace fossil fuels with clean energy, then it will be an utter failure.

In its most recent Emissions Gap Report, the UNEP (United Nations Environment Programme) included a section on negative emissions. It notes that “In order to achieve the goals of the Paris Agreement, carbon dioxide removal is likely a necessary step.”

Related Articles:
Key Indicators of Climate Change Continue Unabated
Be Inconvenient. Our World Depends On It
A Climate Turning Point – Summer of 2017