Below 2C
Home Socio-Politico Canada Strike For Climate: Fridays For A Future 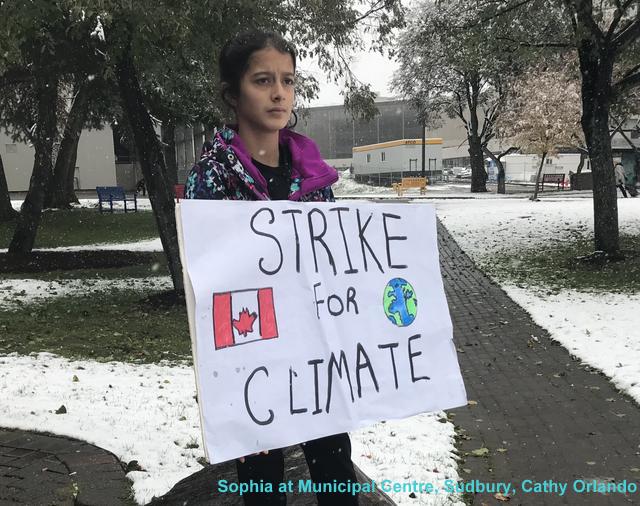 I’ve been a climate activist for over a decade now. I often ask myself if I’m having any impact at all in the fight to save our warming planet from catastrophic climate change. Is my work making even an ounce of difference? Can I spend my time more constructively? Am I suffering from activist fatigue? But luckily the climate movement is changing, it’s evolving and getting stronger. And it’s happening at just the right time when the IPCC has declared a state of climate emergency in its latest report. We have only 10-12 years to act or else suffer dire climate consequences. Younger generations “get it”. Strike for climate and #FridaysForFuture make me feel more hopeful.

The rise of youth climate activism around the globe is reassuring. It motivates me and emboldens me to do even more. It gives me hope for the future of my grandchildren who range in age from 8 to 13 years.

This piece is the story of 11-year-old Sudbury youth Sophia Mathur who watched a video (in August) about 15-year-old Greta Thunberg striking from school. Sophia then asked her mom if she could strike from school too. At the time, her mom said, “Let’s think about it”. (Source: Citizens’ Climate Lobby Canada media release).

Following the hottest summer on record in Sweden since records began 262 years ago , Swedish teenager Greta Thunberg started cutting classes at school. Dismayed by lack of real action on the climate crisis, Greta said, “If grown-ups don’t give a <__> about my future, I won’t either.”

Sophia is No Stranger to Climate Activism

With her family, Sophia took part in the world’s largest climate march in New York City on September 21, 2014. And she has been lobbying politicians on Parliament Hill in Ottawa and  on Capitol Hill in Washington DC for climate action since she was nine-years-old with the organization Citizens’ Climate Lobby where her mom works as the International Outreach manager.

In the summer of 2017, at the screening of an Inconvenient Sequel Sophia met former Vice President Al Gore and gave him one of her drawings thanking him for protecting her future. At this same event, Sophia also made a pinky-promise to get adults to protect the climate with Canada’s Minister of Environment and Climate Change, the Honourable Catherine McKenna. Sophia quickly got to work. In the summer of 2017, she convinced a local restaurant in Sudbury to stop automatically giving out straws and soon after two more local restaurants also took up her challenge. 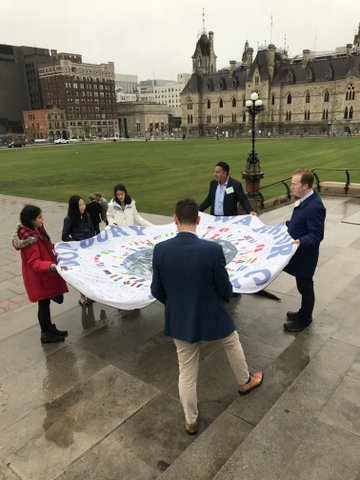 From October 13-16, 2018, Sophia and two of her friends, Salma and Maggie, attended Citizens’ Climate Lobby Canada’s fifth annual national conference and lobbying days in Ottawa.  They brought Parachutes for the Planet to Parliament Hill to show to MPs that they want a soft landing on the climate crisis. (Photo, Cathy Orlando, Sudbury youth with their MP Paul Lefebvre on Parliament Hill showing him a parachute for the planet they created).

They also watched the Emergency Debate in the gallery of the House of Commons on the United Nations 1.5 C report about the climate crisis. After watching the exchange between the politicians Sophia said, “The MPs need to cooperate more.”

Sophia knows that although Canada is doing a lot to combat the climate crisis, we are not doing enough nor our fair share.  She also knows we don’t have time to wait.

Thus, when she returned home from Parliament Hill, Sophia and her mom talked and concluded that they needed to do more to create the political will for climate action.  They researched more about Greta and found out that she is only striking on Fridays.

Fridays For A Future

In the movement “Fridays for a Future”, (a.k.a #FridaysforFuture) Greta asks people to sit outside their parliament buildings or local government buildings on Fridays and strike for the climate.

“If adults don’t care about our future why should I? What is the point of going to school?” ~ Sophia agrees with Greta

Thus, Sophia has decided to join 15-year-old Greta’s “Fridays for a Future” and strike from school one Friday a month to draw attention to the fact that adults are not doing enough to protect her future.

Starting Friday, November 2, 2018, and the first Friday of every month, Sophia will sit near City Hall in Sudbury, Ontario in Memorial Park from 9:00 am to 3:00 pm with placards and information about the urgency of the climate crisis. Anyone is welcome to join her. Bring a nice chair and a blanket because it is almost winter now in Sudbury.

“Adults need to cooperate and listen to the experts. This is a crisis.”

12 Reports You Should Know About As COP26 Unfolds

Election 2021 Is All About Climate