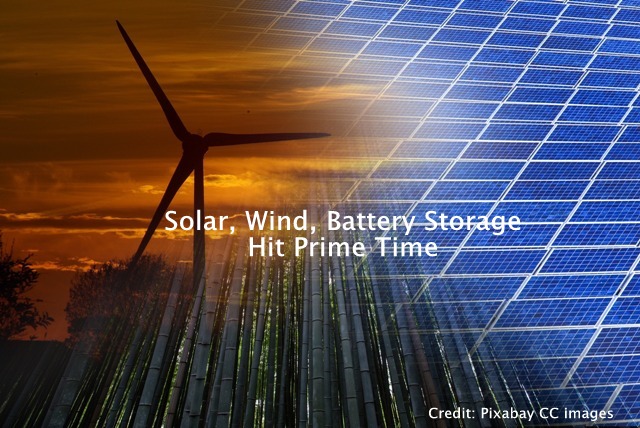 The transition to a low-carbon future is one of the driving forces that will allow our civilization to meet the climate change challenge head on. “And more than any other part of the climate change story, the continuing boom in renewable energy, energy efficiency, and affordable battery storage is a source of excitement, momentum, and hope,” writes Mitchell Beer of The Energy Mix. The following features the story of renewable energy in 2018.

The plummeting cost of clean alternatives is already old news, with one industry publication stopping to mock a posted price of 1.79 cents per kilowatt-hour that still got Saudi Arabia the headline it wanted for low-cost solar development. And Project Drawdown has published its inventory of 80 proven solutions and 20 “coming attractions” that can drive the shift to a post-carbon future. In 2018, analysts and project developers showed that affordable, reliable technologies are a cornerstone of that transition, with far greater potential ahead if investment can scale up to meet the decarbonization challenge laid out in the landmark Intergovernmental Panel on Climate Change (IPCC) report on 1.5°C pathways.

The Global Commission on the Economy and Climate laid out the sheer scope of the off-carbon opportunity, reporting that the “bold action” needed to address the climate crisis could deliver at least US$26 trillion in economic benefits through 2030, produce more than 65 million low-carbon jobs, prevent 700,000 premature deaths, and generate $2.8 trillion in government revenues in that year. Renewable electricity posted record growth, but both the Renewables 2018 Global Status Report and the International Renewable Energy Agency warned that a great deal more will be needed to match the targets countries adopted under the Paris Agreement, much less the more ambitious imperatives in the IPCC report.

Renewables accounted for 10.3 million jobs worldwide in 2016, en route to 28 million in 2050; the massive job count had renewables and efficiency taking hold in every U.S. zip code; an Ohio energy innovation study showed the potential for 20,000 new jobs powered by US$25 billion in new investment; and Alberta introduced a new training course for solar farm and wind technicians.

The Drive for 100% Renewable Energy

With some exceptions, the drive for 100% renewable electricity gained traction in 2018, with yet another low-carbon study concluding the apparently audacious target is doable and affordable. Renewables kept beating fossil energy on cost, electricity prices below zero heralded the end of the “energy mainframe,” and an Australian utility executive declared the end of 24/7 baseload power. The “electrification of everything” was on track to triple global grid capacity by 2050, renewables and storage began outpacing natural gas for peak power supply in the United States, Bloomberg said renewables would deliver 64% of global electricity supply by 2050, Project Drawdown said greater flexibility would enable an 80% renewable grid, and other studies showed 100% renewable energy grids were already a reality.

The Calgary-based Canadian Energy Research Institute said Canadian wind and bioenergy resources came in ahead of natural gas for the most affordable carbon reductions, and First Nations sought a bigger stake as Alberta opened a 700-megawatt tender for renewable energy procurement.

A five-gigawatt solar farm won planning approval in India, and the country set a mandatory renewables target for big power consumers, as falling solar costs and alarming levels of air pollution threatened a dominant but dirty coal industry. India also began encouraging hybrid wind and solar facilities to get the most out of both technologies.

Wind was set to become Europe’s biggest electricity source by 2027, Sweden expected to reach its 2030 renewable energy target in 2018, offshore wind in the United Kingdom was on track to hit price parity in 2025 and grow sixfold by 2030, UK renewable energy capacity exceeded fossils for the first time, and subsidy-free British renewables were on track to push out natural gas by 2030.

Average wind power costs came in at 2.2 cents per kilowatt-hour in the United States, a U.S. utility received “fabulous” bids of 2.1 cents for wind+storage and 3.6 cents for solar+storage, and a Nevada utility project came in at 2.37 cents.

More than 100 cities produced at least 70% of their electricity from renewables in 2017, San Diego set a 2035 deadline to meet a 100% renewable energy target, Regina settled on 2050, and Edmonton planned to power 100% of its operations with renewables by 2030 after the Republican mayor of Georgetown, Texas, extolled the benefits of making the shift. Boston Mayor Marty Walsh, co-chair of the 400-member Climate Mayors network, invited his counterparts across the United States to share their energy demand data as a first step in pooling their requests for proposals to renewable energy developers.

For years, as distributed renewable energy emerged as a practical alternative to traditional fossil-fired electricity generation, grid managers fretted that renewables couldn’t deliver the reliability that utilities depend on and their customers expect. In 2018, battery storage continued to transform the conversation.

Tesla’s renowned big battery in South Australia saved consumers A$35 million in four months, putting up performance numbers that defied skeptics and sent industry “bananas”. Another big battery in Australia was quietly changing attitudes about the grid. India pushed ahead with battery storage for a renewable grid, and Tesla closed a land deal for a US$2-billion battery gigafactory in Shanghai.

Solar and wind with storage became the default choice for United States utilities, and battery manufacturing in the European Union was set to grow 20-fold by 2025.

You can read the full article first published in The Energy Mix.

Related articles:
The Renewable Energy Potential is Limitless
Milestones In The Fight Against Climate Change

Scotland’s renewable projects to speed the country out of crisis