Below 2C
Home Climate Climate Politics Will Trudeau Keep Up With The Yanks On Climate? 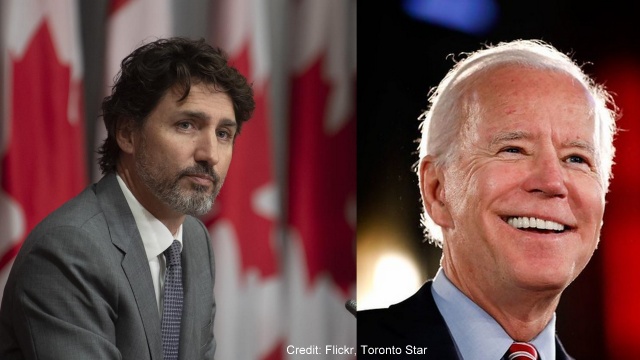 Justin Trudeau’s reign as a self-proclaimed climate leader is about to come crashing down at the Biden Climate Leaders Summit. Breaking onto the climate scene during the 2015 Paris climate talks (that led to the Paris Agreement) Trudeau became the embodiment of hope both at home and on the world stage for dealing with the emerging climate emergency.

Keeping Up With the Yanks on Climate

“In the Trump era, Trudeau seemed a beacon of climate sanity and action (at least in the North American context). But today, the U.S. is catapulting ahead of Canada, with Biden seizing the mantle of exciting climate leadership, while Trudeau’s record appears lacklustre and tepid in comparison,” writes Seth Klein in his National Observer opinion piece.

And in A Good War – Mobilizing Canada for the Climate Emergency, Klein identifies four markers that indicate that a government is in emergency mode:

Whereas President Biden seems to be hitting these markers, the Trudeau government is  failing miserably on all four even after declaring a climate emergency in June 2019—22 months ago.

A recent Climate Access Report shows that 77% of Canadians want Canada to keep up to the Americans as they speed up action on the energy transition the world needs. However there are many disparities between the Biden and Trudeau climate plans that will make it difficult, if not impossible, for Canada to keep up with the Americans.

First Canada will have to scale up its spending on climate tenfold to keep up. Biden has announced a jaw-dropping US$2.5 trillion infrastructure program which includes vast sums for climate-related programs and greening the US economy. A parallel initiative in Canada would require about $25 billion per year but we have committed to spending $5 billion Canadian over 7 years. The bottom line: Canada is spending pennies on climate compared to the Americans.

The Biden plan will not only introduce sweeping measures to combat climate change but will also replace billions in fossil fuel subsidies with clean energy incentives. Eliminating subsidies for fossil fuels could save a staggering $35 billion in the coming decade.

On the other hand the Trudeau plan does not contemplate a reduction in subsidies. A recent report by Environmental Defence – Paying Polluters: Federal Financial Support to Oil and Gas in 2020 – reveals that despite promises to phase out fossil fuel subsidies, the federal government continues to prop up fossils with an increase of subsidies and support of almost $18 billion in 2020 “putting it in the same league as global climate laggards like Australia, Iraq, and Saudi Arabia,” writes Mitchel Beer in The Energy Mix.  In contrast the Government’s new climate plan commits $15 billion to climate initiatives – spread over ten years.

In her first federal budget of April 19, Finance Minister Chrystia Freeland announced new measures to reduce greenhouse gas emissions by increasing the present emissions target (determined by the Stephen Harper government) from 30% to 36% compared to 2005 levels. This new target is likely to be enhanced further to 40% as Biden and Trudeau agree to new targets at the leaders climate summit. Targets however are not climate action. Canada remains the only G7 country with rising emissions in spite of setting previous emissions targets that were never met.

Canada’s “strengthened” climate plan released in December 2020 — A Healthy Environment and a Healthy Economy — is arguably weaker than its predecessor, the Pan Canadian Framework on Clean Growth and Climate Change. The new plan continues to support fossil fuel expansion, promotes the rolling out of small nuclear reactors, supports carbon offsets and increases financing for carbon capture.

Environmental groups are criticizing the funding for carbon capture technology and the oil and gas sector included in the new federal budget, arguing that it will delay the transition away from fossil fuels.

Julia Levin, the climate and energy program manager at Environmental Defence, said the funding risks locking Canada into “decades of increased carbon pollution…We need to be starting the wind-down of the oil and gas sector in order to ensure that we have a liveable planet — these supports do the exact opposite.”

The Truth About Climate

President Biden has been telling Americans the truth about the scope and magnitude of climate change calling it “the number one issue facing humanity.”

“Climate change is the existential threat to humanity. Unchecked, it is going to actually bake this planet. This is not hyperbole. It’s real. And we have a moral obligation.”

Meanwhile Trudeau’s statements about climate action never focus on the severity of the climate challenge or the need for Canadians to mobilize and brace for difficult times ahead. The Trudeau narrative is a shifty combination of economic and environmental goals meant to keep the Canadian public mostly satisfied about his government’s performance on climate. It’s a we’ve-got-this-you’re-in-good-hands strategy that is keeping a large portion of Canadians sleep-walking through a climate emergency that his own government declared in June 2019.

“We must also continue to fight climate change for the good of Canadians, our economy, and our planet. Canadians don’t have to choose between clean air and good jobs. This strengthened climate plan will help us build a healthier, fairer, and more resilient future that we can be proud to pass on to our children and grandchildren.”

Surely Justin Trudeau will want to avoid embarrassment at the Leaders Climate Summit. Participants will not be fooled by a suave and charming Trudeau promising once again that Canada is back on climate. That worked in Paris but will not work in Washington. His goal should be to stand out as a leader—not just to avoid humiliation.

ICYMI:
Heads-Up to Canadians: Your Government is Financing Pollution
Support For a Dying Industry Or a Just Green Transition: You Can’t Do Both
The Weak Links in Canada’s New and “Improved” Climate Plan