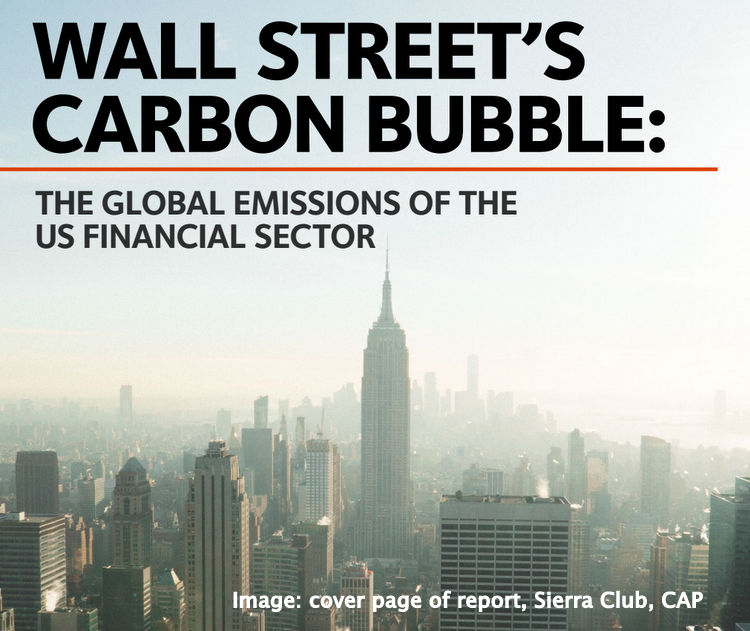 A new report finds that American banks and investors are not just fueling the climate crisis but they’re also setting up the next economic crash.

(This article was previously published in Common Dreams by Jessica Corbett.)

Emissions of US Banks and Investors

Fueling fresh calls for swift, sweeping action by President Joe Biden and financial regulators, a recent report just published reveals that if the planet-heating pollution of the 18 largest U.S. asset managers and banks is compared to that of high-emissions countries, Wall Street is a top-five emitter.

“Financial regulators have the authority to rein in this risky behavior, and this report makes it clear that there is no time to waste.”

The new report—entitled Wall Street’s Carbon Bubble: The global emissions of the U.S. financial sector—was released by the Center for American Progress (CAP) and Sierra Club. The analysis was done by South Pole, which replicated an approach it used earlier this year for a U.K.-focused effort commissioned by Greenpeace and the World Wide Fund for Nature (WWF).

Though likely a “gross underestimate,” as Sierra Club put it, because the analysis relies on public disclosures that exclude key data, the researchers found that “just the portions of the portfolios of the eight banks and 10 asset managers studied in this report financed an estimated total of 1.968 billion tons CO2e based on year-end disclosures from 2020.”

Compares to emissions in Russia

Putting that CO2e—or carbon dioxide equivalent, which is used to compare emissions from various greenhouse gases—figure into context, the report notes:

When Wall Street is factored into the list of the world’s top 10 countries responsible for the most annual greenhouse gas emissions, it falls after China, the United States, India, and Russia but ranks ahead of Indonesia, Brazil, Japan, Iran, and Germany, according to Climate Watch data.

As the new publication warns:

The findings of this report make clear that the U.S. financial sector is a major contributor to climate change. Given that the indirect emissions of the U.S. financial sector are just below the total emissions of Russia, it should be considered a high-carbon sector and treated as such. Therefore, if President Biden and his administration do not put in place measures to mitigate U.S.-financed emissions, the United States will almost certainly fall far short of its targets to achieve a 50% to 52% reduction from 2005 levels in 2030 and net-zero emissions economy-wide by no later than 2050.

The implications of falling short would be dire. Continued unfettered emissions supported by the financial industry would mean that the deadly wildfires, droughts, heatwaves, hurricanes, floods, and other extreme weather events that Americans and communities around the world are already experiencing will only become worse, and efforts to mitigate emissions will only become more challenging and costly.

Representatives from the groups behind the report echoed its call to action in a recent statement:

“Climate change poses a large systemic risk to the world economy. If left unaddressed, climate change could lead to a financial crisis larger than any in living memory,” said Andres Vinelli, vice president of economic policy at CAP. “The U.S. banking sector is endangering itself and the planet by continuing to finance the fossil fuel sector.”

Vinelli added that “because the industry has proven itself to be unwilling to govern itself,” regulators including the U.S. Securities and Exchange Commission and Office of the Comptroller of the Currency “must urgently develop a framework to reduce banks’ contributions to climate change.”

If the top US banks & asset managers were a country, they’d be the world’s 5th largest emitter—and that’s likely a huge underestimate.

More than three dozen climate advocacy groupshave  argued that “what ALEC claims to be discriminatory action”—referring to divestment from major polluters—”is instead prudent action to ensure the stability of our financial system and economy.”

“We know from the Great Recession that the financial sector won’t take responsibility,” the organizations noted. “It’s up to regulators to protect people from the impact on climate and financial risk of fossil fuel investment.” 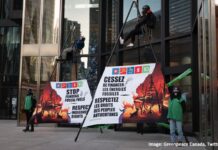 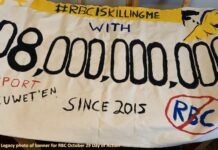 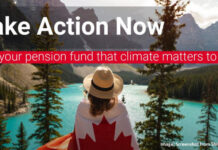