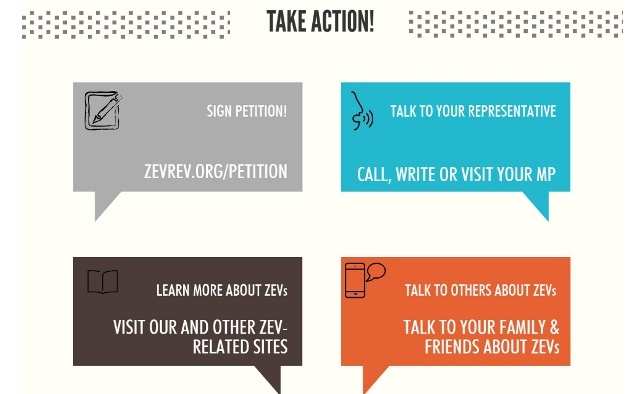 Mohan Kumar is a climate advocate colleague. We have been members of the same local organizations in Ottawa such as Citizens’ Climate Lobby and 350.Org Ottawa. Mohan was also the principal driver behind the Price Carbon Now campaign for broad, effective and equitable carbon pricing. His latest endeavour is a campaign for a strong Canada-wide zero-emission vehicle (ZEV) mandate. I’m pleased to collaborate with him again by featuring the online petition and letter-writing campaign. (Rolly Montpellier, Editor for Below2°C)

Greenhouse gas emissions from transport account for 24% of Canada’s emissions. A greater share of electric and other zero-emissions vehicles is needed to reduce these emissions. For this, a number of policies are needed, including a zero-emission vehicle (ZEV) mandate. Such a mandate would be directed at large automakers, and would encourage them to develop and market more ZEVs. This, in turn, would lead an increase in market share of ZEVs and to a reduction in transport-related greenhouse gas emissions.

Let’s get the Canadian government to adopt a strong nation-wide zero-emission vehicle mandate!

GHG emissions from transportation accounted for 24% of Canada’s total emissions in 2015 — ONE in FOUR tonnes of GHGs was from TRANSPORTATION. Increasing the market share of ZEVs would reduce Canada’s GHG emissions. This, in combination with other market-based policies and smart regulations, will enable Canada to meets it Paris climate deal target (30% reduction from 2005 levels by 2030).

What A ZEV Mandate Will Achieve 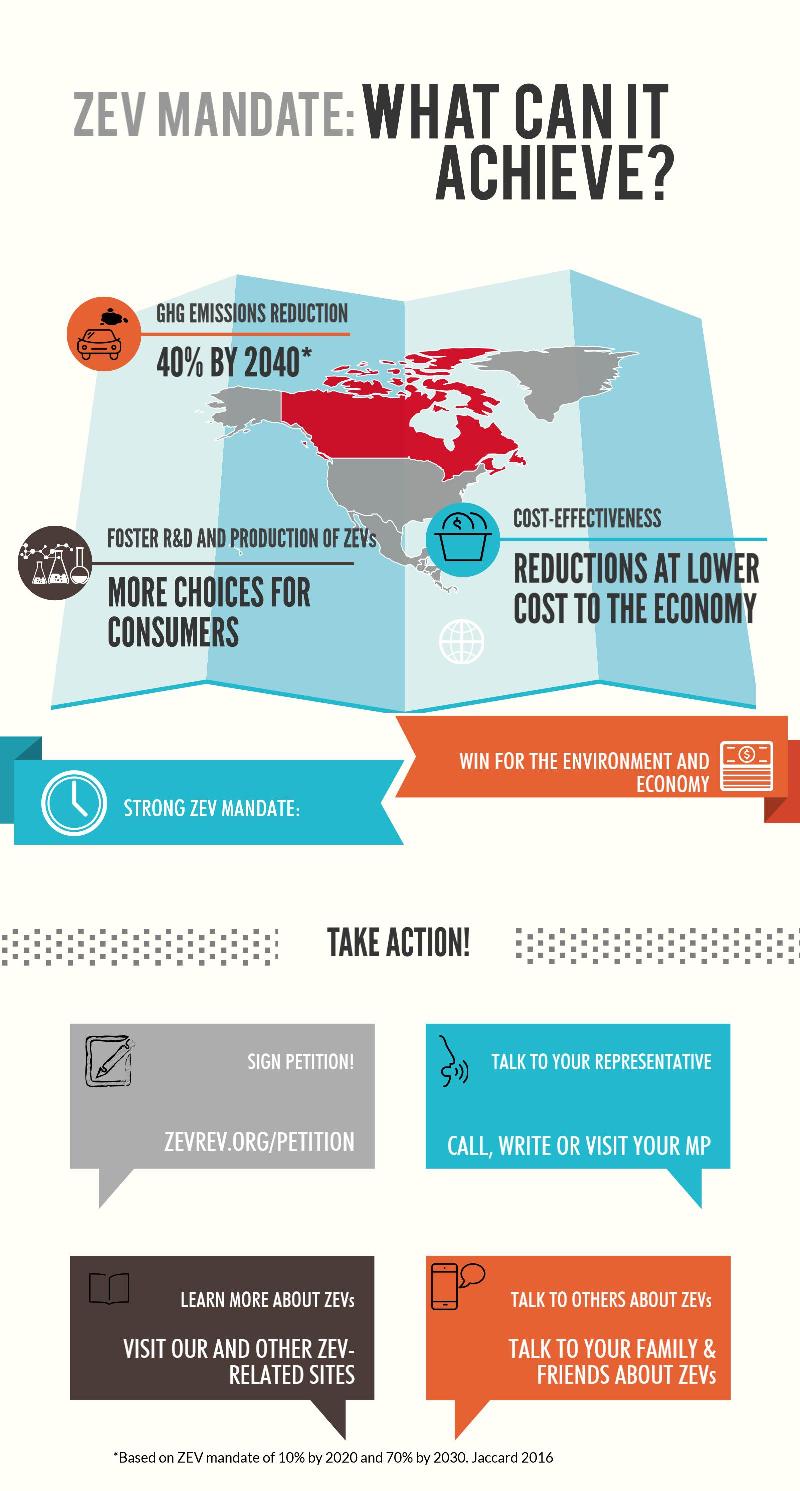 There are several policy options for increasing the market share of ZEVs including providing incentives for potential buyers, developing an adequate infrastructure such as a network of charging stations for electric vehicles, and implementing a ZEV mandate. Professor Mark Jaccard of Simon Fraser University (SFU) has suggested that having a balanced and flexible ZEV mandate with a target of 10% of new vehicle sales, that is one in ten new cars sold would be a ZEV, in 2020 and increasing to 70% by 2030 could lead to a 40% reduction in transportation-related emissions.

A study by the Simon Fraser University indicates that the current supply of electric vehicles is inadequate, and that increasing the supply to 56 models would greatly increase market share. In a report in 2017, the Ecofiscal Commission argued that a ZEV mandate would be more cost effective than some other measures. So, an evidence-based, balanced and flexible ZEV mandate could be both economically sound and effective.

What Can A ZEV Mandate Do?

Research by Professor Mark Jaccard suggests that a “balanced and flexible PZEV-ZEV mandate in Canada that will require automakers to achieve targets of 10% ZEVs of new sales by 2020 and increasing to 70% by 2030 would reduce annual emissions by 40%. This is equivalent to having a carbon price of $100-150/tonne of CO2e. Jonn Axsen of SFU suggests that a national ZEV mandate in Canada that is aligned with Quebec’s and California’s ZEV targets would facilitate achieving the goal of 40% ZEV sales by 2040. Furthermore, he argues, with such a mandate, purchase incentives such as rebates could be eliminated in the long term.

WHAT CAN YOU DO?

Related articles re clean energy platform:
Clean Disruption Of Energy and Transportation. Hope For Staying Below2°C
The News On Renewables Gets Better And Better