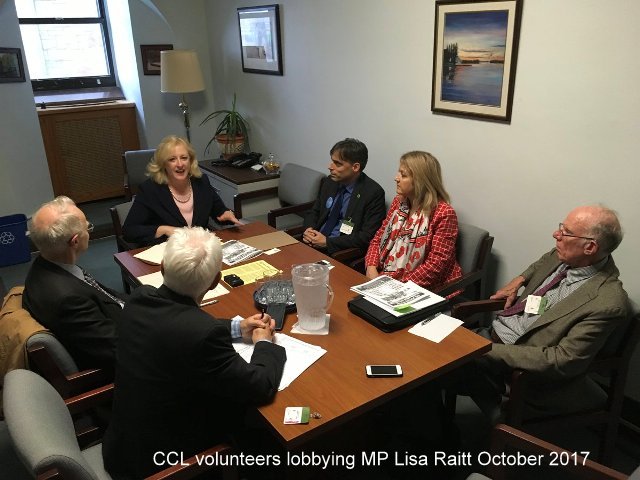 Over 50 citizens from across Canada will lobby for a liveable world on Parliament Hill October 13-16. This year’s lobbying of elected officials by Citizens’ Climate Lobby Canada (CCL) volunteers takes on a heightened sense of urgency. The United Nations has just warned that we have only 12 years to keep the warming of the planet between 1.5C and 2C and thus prevent a climate change catastrophe.

Lobbying for a Liveable World

When we lobby, all of our volunteers use the following “Leave Behind” document. It provides our background information and the specific asks we are making of Parliament. It forms the basis of the discussions we have with Parliamentarians. It is the document we leave behind at the end of the session.

The scientific proof of the threat of climate change is incontrovertible and cannot be dismissed. We must cut emissions. Almost all economists agree that putting a price on carbon pollution is the most economically efficient way to reduce greenhouse gas emissions.

Citizens’ Climate Lobby advocates for a specific form of carbon pricing called carbon fee and dividend, an incrementally rising price on carbon pollution where 100% of the fees collected are returned to Canadians by cheque. It is championed by Canadians for Clean Prosperity and has been specifically endorsed by the PostMedia Editorial board.

In their historic March 2018 report, Perspectives on Climate Change Action in Canada—A Collaborative Report from Auditors General, Canada’s Auditors General concluded that Canada is not on track to meet its greenhouse gas emission targets.

Transforming the economy will not happen overnight. Julie Gelfand, Canada’s Environment Commissioner, said that Canada needs time to “bend the curve”. Importantly, carbon pricing is projected to account for more than half of Canada’s prospective total emissions reductions through 2022. The Pembina Institute calls carbon pricing an essential component of a cost-effective climate plan. According to the World Bank Carbon Pricing Dashboard, 25 percent of the world’s nations, including China, are already pricing carbon.

We applaud the federal carbon price as outlined in the Greenhouse Gas Pollution Pricing Act and appreciate the Government’s commitment to peer reviews of fossil fuel subsidies under the G20 process.

We recommend the following going forward:

CCL is grateful for your service to Canada, and for your recognition that the climate crisis is inextricably linked with the many other problems facing societies and governments. This is a race against time. Effective carbon pricing policy will help secure the future of Canada and all Canadians.

The leave-behind document is a Citizens’ Climate Lobby Canada publication.