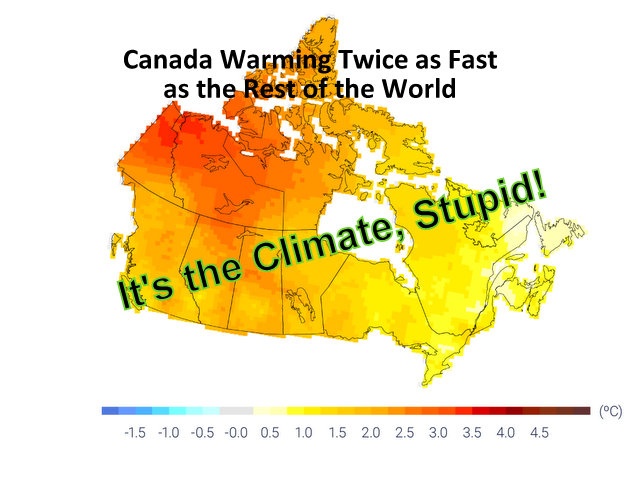 Canadians are in an election campaign that will stretch out another four weeks. We’re also in a climate emergency. Our government said so following a recent report that shows Canada is warming at twice the global average.

As I closely follow the campaign I can’t help but notice all the political drible coming from party leaders who are trying to outdo one another with cart-loads of empty promises most of which will die on the table when the campaign ends. The only exception is Elizabeth May of the Green Party of Canada who wants “to be brutally honest with Canadians on averting climate catastrophe,” reports The Canadian Press.

What is missing since the start of the campaign—some 10 days ago—is the lack of media coverage and the lack of interest about the climate crisis—unquestionably the most serious problem facing Canadians and humanity as a whole. Where are those promises on making our lives more livable? Where are the promises that will provide hope to our kids and grandkids? Where are the promises that will protect their future? When will politicians wake up? It’s the climate, stupid!

‘It’s the climate, stupid’ is a spin-off of ‘it’s the economy stupid“, a phrase coined by James Carville, a strategist with the Bill Clinton election team during the 1992 presidential campaign. Those four words got Clinton the presidency against all odds running against incumbent President George W. Bush. It was a brilliant strategy that got the attention of voters preoccupied with the prevailing recession in the U.S. In our election, the prevailing  voter concern is climate and the environment.

Voters have to keep reminding candidates running for office what really matters to them. We must tell them over and over and over again that the biggest threat to everything we love and everything we care about is climate change. Politicians must be forced to tell the truth—break the silence—about the climate emergency.

The Climate Emergency is the Main Thing

“At Harvard Business School they teach you that success in any organisation comes down to following a simple principle, which is this: ‘The main thing is to make sure that the Main Thing really is the main thing,” said Sir James Bevan (Chief Executive of the Environment Agency) during a recent speech given in London, England.

Our Government is fully aware of the scale and magnitude of the climate problem as well as the dire consequences of not addressing it head on with very ambitious climate policy. Climate change is damaging the air we breath, the land that grows our food and the oceans that once thrived with life. Consequently, our youth is facing an unsettled and uncertain future.

The following is an excerpt from the recent Canada’s Changing Climate Report, the first in a series of climate assessments that will guide climate policy for decades to come. The report is very frank:

“The effects of widespread warming are already evident in many parts of Canada and are projected to intensify in the near future. A warmer climate will affect the frequency and intensity of forest fires, the extent and duration of snow and ice cover, precipitation, permafrost temperatures, and other extremes of weather and climate, as well as freshwater availability, rising of sea level, and other properties of the oceans surrounding Canada.”

“In a September 8 editorial, just days before the campaign officially began, the Globe and Mail recounted how quickly climate has arrived as a key campaign issue,” writes Mitchell Beer in a recent piece in The Energy Mix. “How Canada grapples with climate change will be at the top of the election agenda…Polls show that Canadian voters care about climate change more than ever,” he quotes from the editorial.

Canadians across the country will engage in the Global #ClimateStrike on Friday, September 27, when Greta Thunberg visits Montreal.  The Canada-wide action will propel climate to the top of the political agenda during the remainder the election campaign. Hundreds of thousands of Canadians will march and demonstrate against the timid reaction to climate change by world leaders and Canadian leaders. 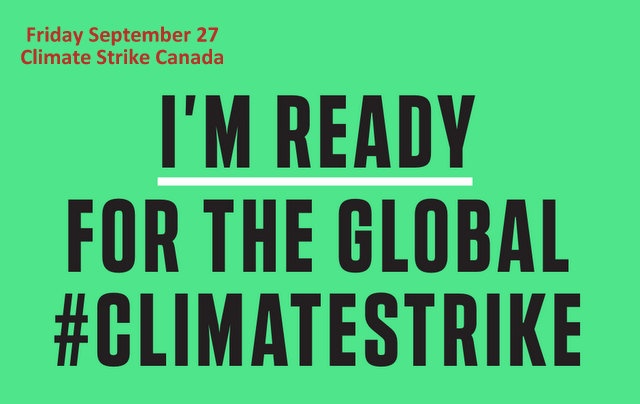 The main objective of 100 Debates is to encourage a race to the top on climate change and broader environmental policy issues. It will demonstrate the strong public support that exists for environmental leadership, and enable the best policy ideas to come forward to compete for that support (Source: 100 Debates website)

This will be followed by the 100 Debates for the Environment a project made up of national non-profits, businesses, citizens’ groups, high schools and universities, individuals and many others. The project is being coordinated by GreenPAC and Equiterre. “The main objective of 100 Debates is to encourage a race to the top on climate change and broader environmental policy issues. It will demonstrate the strong public support that exists for environmental leadership, and enable the best policy ideas to come forward to compete for that support,” notes the website.

This election is happening at a critical time for the future of Canadian youth. We’re already too late to stop global warming but we’re not too late to slow it down. “It always comes down to one thing: did we get going in time,” writes Bill McKibben in a recent email to 350.Org Canada supporters.

And so everyday, as a voter, I remind myself that it’s che climate, stupid. Because if we don’t solve the climate crisis, nothing else will matter. I’m personally terrified about what the future might hold for my grandchildren if we continue on the fossil-fuel path our previous and current governments have chosen.

Related articles:
Politicians Lag Behind The Public On #ClimateEmergency
Ending The Climate Silence: We Have To Talk About It