Below 2C
Home Environment The Birds of Paradise

This video takes you inside the world of the spectacular birds of paradise found primarily on the island of New Guinea. Birds of Paradise is the culmination of a research project undertaken by the Cornell Lab of Ornithology. Stretching right across South East Asia, from Sumatra and Borneo to New Guinea and the Solomon Islands, the paradise forests form a wonderfully diverse region.

The Birds-of-Paradise Project reveals the astounding beauty of 39 of the most exquisitely specialized animals on earth. After 8 years and 18 expeditions to New Guinea and Australia, Cornell Lab scientist Ed Scholes and National Geographic photojournalist Tim Laman succeeded in capturing images of all 39 species in the bird-of-paradise family for the first time ever.

The implicit message of the video is the urgent need for the protection of the natural ecosystems and particularly this beautiful rainforest which is the natural habitat for the birds of paradise. Illegal logging, hunting and the expansion of palm oil plantations all threaten their future.

The video will take you from the unexpected to the extraordinary in the blink of an eye. You will be awe-stricken by something you’ve never seen before. The birds of paradise are unlike any creature on earth and one of the most astounding phenomenon ever witnessed.

The Birds of Paradise

The assault on the paradise rainforests by unscrupulous companies is relentless. Greenpeace has repeatedly exposed the uncontrolled deforestation resulting from corruption and political pressure in New Guinea allowing international logging operators to harvest forest products for export to the Chinese market.

The Paradise Forests are being destroyed faster than anywhere else with so much already lost – 60 per cent in Papua New Guinea and 72 per cent in Indonesia. In fact, Indonesia has been awarded a Guinness World Record for being the country with the fastest rate of forest destruction on the planet. 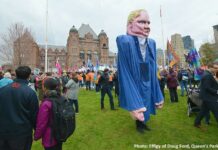