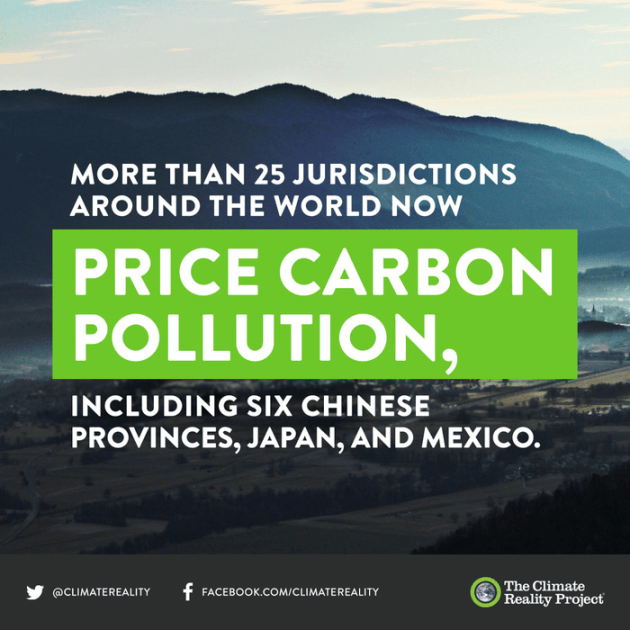 Two numbers that are vital for Ontarians to be aware of: 4, the number of degrees in this century that the planet is on track to warm by, and 6, the number, in trillions of dollars of new economic growth that will result from moving to a low-carbon economy.

A 4-degree increase in the mean temperature of our planet will have catastrophic consequences. Severe weather events are already driving up insurance costs and severely damaging our infrastructure. Food security and costs will be an early problem as climate change impacts where our food is grown and affects our water supply.

Climate Change is a problem with a solution.

On February 12, 2015, the Ontario government released Ontario’s Climate Change Discussion Paper as a first step in engaging Ontarians in a 45-day consultation process meant to inform the government’s decision on which carbon pricing system should be adopted. There are three principal carbon pricing mechanisms available.

Will it be Cap and Trade, Carbon Tax, Carbon Fee?

A carbon tax is a tax or fee levied on the carbon content of fuels1 or a tax based on the greenhouse gas emissions generated by burning fuels.2 In practical terms, it is “fee imposed on the production, distribution or use of fossil fuels, based on how much carbon their combustion emits.”3 Carbon fee or taxes are policy measures to internalize the negative externalities i.e. costs to society and future generations – as a result of global warming and climate change – that are not incorporated in the price of fossil fuels. They are aimed at changing consumer behaviour3 as it “forces individuals to consider the full set of consequences from emissions.”4

There are important considerations when designing a carbon tax including the tax rate, the tax base, and border tax adjustments.

The carbon fee and dividend approach to carbon pricing involves a revenue-neutral carbon fee where the revenues collected from a progressively increasing carbon fee are distributed in the form of dividends to households and individuals. This is advocated by the Citizens Climate Lobby in Canada and the US Citizens Climate Lobby. It is supported by many prominent individuals including Bruce Hyer, MP-Green Party, Dr. James Hansen, Bill McKibben and Dr. Shi-Ling Hsu.

The carbon fee and dividend approach proposed by the Citizens Climate Lobby is based on the “tons of carbon dioxide the fuel would generate.” This would be collected upstream, at the well, mine or port. The proposed fee and dividend would start at $15/ton and gradually increase by $10-15/ton each year.3

In Ontario, the Green Party of Ontario proposed a Carbon Fee and Dividend Act that includes a carbon fee of $25/ton of CO2 equivalent. The revenue from the fee would be placed in the Ontario Carbon Fees Trust Fund and rebated 100% to Ontario households. Rebates will be in the form of equal quarterly per-person dividends to Ontario households. The fee with be coupled with border adjustments. The fee will increase yearly by $25 per ton or more until Ontario’s greenhouse gas emissions have been reduced to 10% of the province’s 1990 levels.4

The Economic Case For a Fee & Dividend Carbon Tax

Cap and trade is a trading-based approach to pricing carbon. In this system, a mandatory cap is placed on the amount of greenhouses that can be released by some or all emitters or producers or importers of fuels that can release greenhouse gases. Based on the cap, a certain number of permits are issued each year, such as one permit or allowance per ton of CO2 or CO2   equivalent GHG gases. The cap would be tightened each year by reducing the number of permits issued each year. To enable trading, a market place is set up where permits can be traded.1

Firms are required to hold permits that are equivalent to their emissions. If a firm wants to increase emissions, it can acquire these permits from other emitters through the trading marketplace. The short video clip below describes California’s cap and trade system.

One variation of the Cap and Trade option is the Cap and Dividend. The distribution of the auction revenue equally to households or individuals (or dividends).

Essential elements of a cap and trade system include   :1–4

For more information, resources and all references, consult Price Carbon Now! ON
_____