Below 2C
Home Socio-Politico Canada Which Side of History Will You Be On? 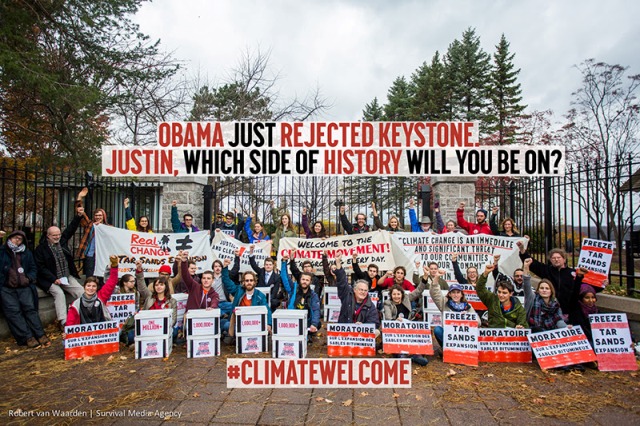 I attended the Climate Welcome training on Wednesday in preparation for the march and sit-in at Prime Minister Trudeau’s residence on Sussex Drive. I felt buoyed by the swearing in of the new PM and his cabinet earlier in the day – finally a breath of fresh air. With the naming of Catherine McKenna as the Minister of the Environment and Climate Change, perhaps I could allow myself to believe – if just for a few minutes – that Canada would take more aggressive action on the climate.

But that hope was shattered by Stephane Dion, Foreign Affairs Minister, on his first day on the job. The Globe and Mail reported that the new Liberal government “backs” the Trans Canada’s Keystone XL pipeline and does not want the project which we oppose to spoil relations with the United States. “We don’t want it to be an irritant,” said Dion.

That was a surprising statement by Stephane Dion who had been the author of a progressive position on climate action in the 2008 election with a proposed Green Shift plan that would have taxed polluters and provided support to taxpayers. He was ahead of his time then. Now he has just proven how he and Trudeau’s Liberals are still behind the times. They are simply not getting the big picture on climate.

And then the next day came President Obama’s rejection of the Keystone XL pipeline – a major victory for environmentalists in both Canada and the United States. The decision has permanently changed the discussion on new projects, say analysts and environmentalists.

It’s premature to talk about other pipelines yet, but if Alberta and Canada don’t introduce proper greenhouse gas regulations for the industry, then it’s going to be challenging to make the argument that those projects are in the public interest ~ Simon Dyer of the Pembina Institute.

This decision points to the opportunity for Canada to build a 21st-century economy based on today’s green, clean energy technologies, rather than continuing to rely on yesterday’s dinosaur fossil-fuel industry ~ Diane Beckett, Sierra Club Interim Director

Mr. Trudeau, which side of history will you be on?

The new Liberal government had the opportunity to shine the light on climate change by agreeing with the Obama decision. Instead it chose to express its disappointment with vague pronouncements about the need to do a better job balancing environmental protection with energy development of oil and gas projects.

“The math of climate change is stark, and it not negotiable. We have to leave the majority of fossil fuel reserves underground, including 85 per cent of Canada’s tar sands, if we’re going to have a shot at staying below two degrees Celsius,” says Cam Fenton of 350.Org and 350.Canada.

The good news is that the definition of what is politically possible on climate change is also changing. Yesterday, while Trudeau was being sworn in, prominent lawmakers in the United States, including presidential candidate Bernie Sanders, launched a new piece of legislation called the “Keep it in the Ground Act” – Cam Fenton article in HuffPost Blog.

Adam Scott, of Environmental Defence (Climate and Energy Program Manager) said that “Obama’s rejection of Keystone XL demonstrates historic leadership by saying no to new fossil fuel infrastructure ….For the first time, a pipeline has been rejected because it puts our climate at risk – a litmus test that the new Canadian government should adopt.” Scott said “the rejection sets an important precedent just days before the climate change summit in Paris.”

This has strengthened my resolve to continue step up my activism. The message to Prime Minister Justin Trudeau and Ministers McKenna and Dion is very clear. You cannot support projects which increase carbon emissions on the one hand and then pretend to be serious about signing an emissions-reduction agreement in Paris. That stance is hypocritical and downright dishonest. Canada needs to freeze Tar Sands development and begin the transition to a clean energy economy NOW. We do not have 3 years, or 2 years or one year. Already too much time has been wasted by the previous government.

The kind of leadership that listens to climate science is exactly what I’m looking from Justin Trudeau. And that’s why I’ll be marching and sitting-in on Sunday, November 8th – Day 4 of Climate Welcome. I encourage everyone who shares my climate concerns and wants to nudge this new government in the right direction to be there. We must be relentless in our pressure to get Canada back on the right climate track.

The world is watching and so are our children and grandchildren.