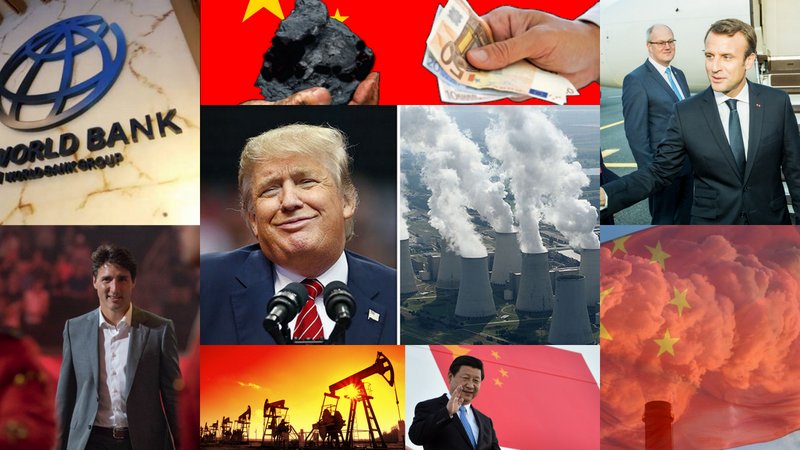 As 2017 draws to a close and flips into 2018, a short pause to reflect on my work as a climate activist and blogger is an unavoidable exercise. As usual, there are a lot more questions than answers. Are we making any progress in tackling climate change? Who are the climate winners and losers of 2017? Which world leaders or events made a difference? Which get the climate change thumbs ups and thumbs downs? What can we expect in 2018?

The void left by the US withdrawal from the Paris Accord is difficult to fill. World leaders like Angela Merkel of Germany, President Emmnauel Macron of France and Prime Minister Trudeau of Canada have stepped up as climate leaders by promoting their countries as climate champions. But the thumbs up goes to President Xi Jinping of China.

China is showing the world what climate action in high gear looks like. China is creating the world’s largest carbon trading market. And the Chinese are leading the global energy transformation. Earlier in 2017, China announced investment plans of $360 billion in renewables by 2020 and scrapped plans for 85 new coal-fired power projects. Furthermore, the Chinese are planning to produce 7 million electric vehicles per year by 2025.

Yet, in spite of all its climate achievements, China remains the world’s number one polluter, producing more than 25 percent of the planet’s greenhouse gases, nearly as much as North America and Europe combined.

Macron’s climate change One Planet Summit in December has been described as a ‘stroke of genius’. Macron’s words matter because of the climate leadership vacuum left by the US departure from the Paris Agreement. “Thank you for having decided, collectively, not to accept defeat,” stated Macron to summit attendants which included global business and political leaders.

Since coming to office, Macron has made a series of stunning announcements that leave no doubt in his determination to become a world climate leader. France is pushing for an increase of the EU carbon price to 30 euros a ton to provide a stronger signal to industry to reduce emissions. In July, France announced it will ban the sale of combustion engine – gas and diesel – cars by 2040. And more recently, Macron announced a ban of all oil and gas production also starting in 2040.

A big shift is starting in the banking industry. Earlier in 2017, 11 major banks holding some $7 trillion agreed to start reporting on the risks from climate change on their assets. The world’s financial community is increasingly understanding its vital role in meeting the world’s Paris emissions-reduction goals.

Norway’s sovereign wealth fund is considering divestment from fossil fuel companies. Meanwhile, European insurance giant Axa will no longer be investing in Canadian tar sands production and pipelines. The company will divest itself of some $825 million for both business and ethical reasons. At the recent One Planet Summit, the World Bank Group President Jim Yong Kim announced it “will no longer finance upstream oil and gas after 2019.”

It is time for all of the institutions, countries, investors and individuals who are still in the Paris agreement to stop funding fossils. ~ Stephen Kretzmann, veteran campaigner with Oil Change International

Donald Trump is an easy front-runner for a multitude of 2017 Thumbs Down awards.His abrasive, arrogant, insensitive and obnoxious leadership style is the very antithesis of what the world needs during these dangerous and uncertain times. And arguably, the most critical issue of our times is climate change.

The Paris Accord, although far from being adequate, did have a chance to work. But by withdrawing, the US has not only relinquished its leadership on climate change, it has sounded the death knell of the agreement.

The shift is dramatic. Climate change references on government websites have been removed. And there are no more discussions of climate change with other heads of state. Climate has simply vanished from both domestic and international agendas.

Trudeau’s climate star has been shining on the international stage since he uttered these now infamous words to a cheering audience of participants during the Paris Agreement talks in December of 2015. “Canada is back my friends. Canada is back, and here to help.” We are ready to “take on a new leadership role internationally,” said Trudeau.

Since then the PM’s star has dimmed considerably. Trudeau has been engaged in a complex dance of supporting fossil fuel expansion while promoting both himself and Canada as climate leaders.

“The Canadian prime minister’s awkward effort to promote Alberta’s oil patch while embracing the urgency of mitigating carbon emissions is becoming ever less credible and harder to maintain, commentators both foreign and domestic observe,” writes The Energy Mix.

Co-founder of 350.org, Bill McKibben, has accused Trudeau of being a “stunning hypocrite” for his incompatible pro-fossil, pro-climate stance. Below2°C editors have cast Trudeau as the world’s greatest climate pretender.

The fossil fuel sector’s nearly 40 years of climate deception and harm is well documented. There is a damming paper trail and field evidence that demonstrate the industry’s shameless greed and ongoing attempts to curtail climate action.

But even as some industry leaders admit openly that the world is moving to a zero-carbon future, oil companies such as Suncor continue to unconscionably lobby governments for subsidies and favors. And although aware of the world’s carbon budget, these same sector leaders continue to explore for even more fossil fuel reserves. Their greed is boundless.