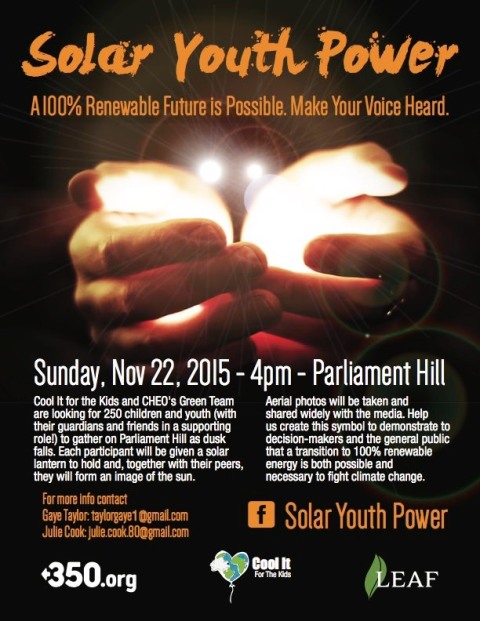 At dusk on Sunday, November 22, Ottawa youth will gather with solar lights to form an image of the sun and call for 100% renewable energy in Canada during their lifetime. Please join my four grandkids and I on Parliament Hill to send a strong message from Canadian youth about the urgency of transitioning to clean energy.

We know that future generations – our young children and grandchildren – will be the most impacted by climate change. For decades I accepted to remain a witness of climate change. I knew it was happening but the impacts would be centuries from now. Surely our technologies would evolve to solve the problem I thought.

But that all changed with the birth of my four grandchildren. If it hadn’t been for them, and my growing knowledge of climate change and global warming, I would probably have spent my retirement enjoying the “good life” as the majority of boomers do. But that would not be my path.

I thank my grandchildren for steering me in the right direction – the path of climate activism. In his book, Storms of my Grandchildren, James Hansen explains how his grandkids changed his life:

My perception of being a “witness” [to global warming] changed, leading to a hard decision: I did not want my grandchildren, someday in the future, to look back and say, “Opa understood what was happening, but he did not make it clear.”

I’ve struggled with how to discuss climate change with my grandchildren and how I can involve them in my climate activism. I want them to face climate reality but still retain the hope of a better future, a future they fully deserve. I believe that they must be involved at a very early age in the socio-political process that will save their planet. On November 22 in Ottawa, there is such an opportunity for them to participate in a Solar Youth Power event which will send a powerful message to our new government.

Ahead of the Paris climate talks at the UN in December, this is a unique opportunity for children and youth in the Ottawa-Gatineau region to express to the newly elected Canadian government the urgency of fighting climate change by transitioning our country rapidly from fossil fuels to renewable energy.

Each child/youth will be given a solar lantern to hold and together with other lantern bearers will light up the dark to form an image of the sun. At dusk, aerial photos will be taken of this formation and shared widely with the media and on social media platforms forming part of a global effort to shine the light of hope for a sustainable future.

“The idea came from two sources,” says Julie Cook, board member for Cool it for the Kids.

The first was the Act on Climate March in Quebec City in April. In the crowd I saw a few young people with symbols on their faces: a circle with an X through it, meaning “no pipelines”. I thought it was an interesting symbol because of its simplicity.

The second was reading Naomi Klein’s book ‘This Changes Everything’, in which she outlines how the environmental movement needs to not only fight against things like pipelines and logging in sensitive areas but also to clearly articulate what it is fighting for.

Out of these two concepts came the idea to give children and youth the opportunity to form a simple image of the sun as a hopeful symbol of the transition to 100% renewable energy. I pitched this idea to Gaye Taylor, Executive Director of Cool It for the Kids, who welcomed the idea and we got to work right away.”

The activity will symbolize the importance and the urgency to take immediate action to transition our country to 100% renewable energy. This is an opportunity for you to make your voice heard. There will be 250 lanterns that need young hands to hold. Bring your child or grandchild and join us.

Please confirm their attendance and reserve a lantern for them at the links found below. We hope to see you there! Help Make This Happen!

Help make the event a success with your Indiegogo donation.