Below 2C
Home Climate Climate Breakdown Greta in Davos: Our House Is Still On Fire 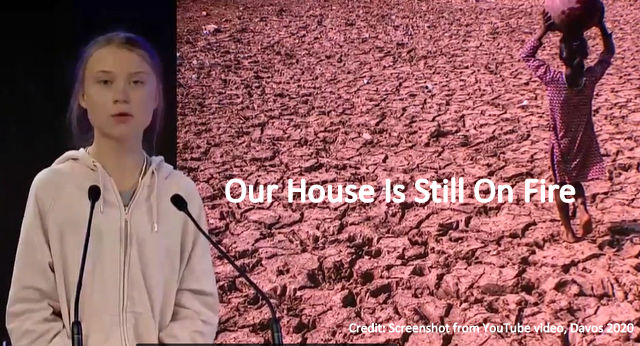 “One year ago, I came to Davos and told you that our house is on fire. I said I wanted you to panic. I’ve been warned that telling people to panic about the climate crisis is a very dangerous thing to do. But don’t worry, it’s fine. Trust me. I’ve done this before and I can assure you it doesn’t lead to anything,” said Greta Thunberg in her opening remarks at the Davos 2020 World Economic Forum. For Greta and the millions of youth supporters around the globe, our house is still on fire. Nothing has changed since Davos 2019. It’s still business as usual.

Our House Is Still on Fire

Scientists are reminding us constantly that we must reduce greenhouse has emissions by 50% by 2030 to have even a small chance to hold warming to less than 2 degrees Celsius. But in fact the opposite is happening. CO² emissions hit a record high in 2019.

Greta’s sarcastic and cynical undertone did not mask the anger and the disappointment she feels with the world’s lack of progress on climate change. “And for the record, when children tell you to panic, we’re not telling you to go on like before,” said Greta.

Mockingly she added a series of “we’re not telling you” remarks to ridicule climate actions claimed by so-called climate leaders:

We’re not telling you to rely on technologies that don’t even exist today at scale and that science says perhaps never will.

We’re not telling you to keep talking about reaching net zero emissions or carbon neutrality by cheating and fiddling around with numbers.

We’re not telling you to offset your emissions by just paying someone else to plant trees in places like Africa while at the same time forests like the Amazon are being slaughtered at an infinitely higher rate.

She made it very clear that our world does not need a low-carbon future. Our world needs a zero-carbon future. And we don’t need to just lower emissions, we need to stop emissions.

Not only did she take a shot at Donald Trump for pulling out of the Paris Agreement, but she targeted all countries which are now failing to gear up their emissions reduction plans to meet their 2030 Paris targets.

The fact that we are all about to fail the commitments you signed up for in the Paris Agreement doesn’t seem to bother the people in power even the least…..completely insufficient — Greta Thunberg

Greta’s speech includes three non negotiable demands that the world’s business and political leaders — companies, banks and governments — must adopt immediately, “not in 2050, 2030 but in 2021.” In other words, NOW:

Speaking quite bluntly to the Davos power elite, she reminded them that “your inaction is fueling the flames by the hour,” and that unlike them, her generation will not give up without a fight.

“Unlike you, my generation will not give up without a fight,” says Greta Thunberg at #Davos https://t.co/AsTn2bvtYS #wef20 pic.twitter.com/G2RUYqB8qp

With generous amounts of guilt directed at world leaders, Greta accused them of just giving up. Most people “understand the fact that we need to change, more than you do,” she said. She asked them what they will tell your children was the reason they failed and what was the reason they left their children facing a climate chaos that they knowingly created.

Our house is still on fire, your inaction is fueling the flames by the hour. We are telling you to act as if you love your children above all else. — Greta Thunberg